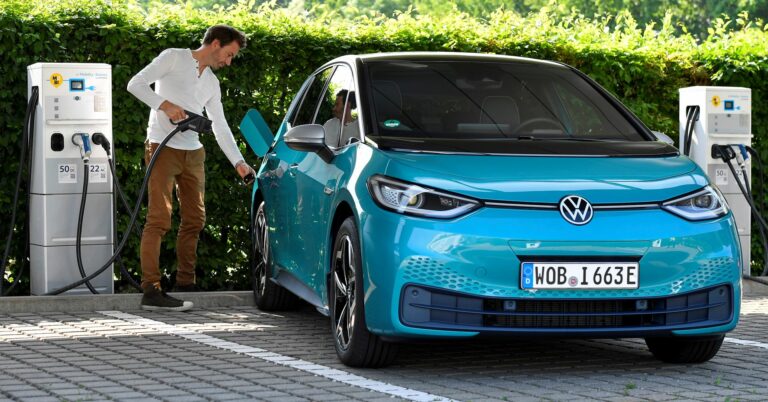 Volkswagen announces its car sales and it is observed that the EV sales doubled in 2021 despite the overall sales going down by 8%. The decrease in sales is mainly because of the semi-conductor shortage and other supply chain constraints. The EV sales include both battery vehicles and plug-in hybrid vehicles, where most sold were all-electric vehicles.

VW’s most popular fully-electric model was, of course, the ID.4 crossover, which topped the BEV charts in Sweden, Denmark, Finland, and Ireland, and lived up to its billing as a “world car” in just its first year on the market. Volkswagen delivered 119,650 ID.4s globally, with 17,000 of those finding homes in the US. The ID.4 was followed by the ID.3, with about 76,000 deliveries, and the e-up! model, with about 41,500.

Volkswagen CEO Ralf Brandstätter stated, “We are continuing to press ahead with the transition to e-mobility despite the limited supply of semiconductors. In a very short time, Volkswagen has reached a top position for BEVs in Europe.” The news comes as Volkswagen sold 369,000 electric vehicles (BEVs and PHEVs) worldwide in the year 2021. Among these, 106,000 were PHEVs, and 263,000 were all-electric vehicles.

Brandstätter stated, “In a very short time, we have reached a top position for all-electric vehicles in Europe. With our ACCELERATE strategy and the expansion of the model portfolio, we will continue to increase the pace of the e-mobility offensive. Before the end of this year, the ID. BUZZ will represent yet another emotional model in our ID. family,”

Board Member for Sales and Marketing at Volkswagen, Klaus Zellmer says that Volkswagen has over sales 8 percent less, but still has achieved satisfying numbers. Especially considering the extremely challenging situation with respect to the semiconductor situation. It could not be solved within a year, however, the high sales show that demand for Volkswagen sales is high, according to Zellmer.

Furthermore, Volkswagen ID.4 is stated to be a bestseller, which is named to be a world car during its first year in the market. In the US, 17,000 units were sold of this model and ranks second in all-electric SUVs in China. Volkswagen generated as much as three-quarters of its sales revenue in the United States with SUVs, selling its highest number of vehicles there since 2013. Regardless, according to Golf Volkswagen is the best selling in 2021 in Germany. Finally, in its announcement, Volkswagen states that it expects “the first half of 2022 at least will remain highly volatile and challenging owing to persistent supply bottlenecks for semiconductors.”