Walgreens Boots Alliance Inc, which owns the retail pharmacy chains Walgreens and Boots, on Tuesday, decided to scrap its plan to sell Boots, a pharmacy chain based in the UK.

Procedures for the sale kicked off in January 2022 and according to the holding company, changes which occurred in the global financial market made them decide to not go ahead with the sale. The Boots business was put up for sale as a strategic review of the company to focus on more on the healthcare market in the United States.

Walgreens Boots Alliance Inc had been in talks with a consortium between Reliance Industries and Apollo Global Management for over £5 billion ($6.1 billion) sale of Britain’s biggest pharmacy chain.

In a statement, the Illinois-based company said that due to various factors such as market instability and availability of finance, no party was able to make any offer which aligns with the potential value of Boots.

Other than the factors related to instability and financing, the market performance of Boots and its No7 beauty brand is also why the company decided to stop the sale and retain business. 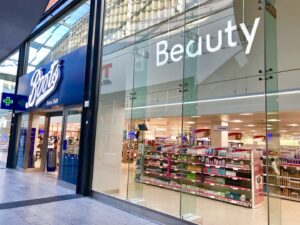 A Boots store in the UK

The recent strong performance of Boots, and its key No7 beauty brand, is also behind the decision to retain the business, the company added in the statement.

Several media reports suggest that the sale of the Boots pharmacy chain was a litmus test conducted by Walgreens Boots Alliance to understand the position of credit markets in the UK.

A consortium led by reliance industries and apollo global management was leading in talks with Walgreens Boots Alliance. While the consortium offered around £5 billion for closing the deal, Walgreens wanted nothing less than £7 billion for selling the boots.

In the race to purchase Boots, the main rival of the Reliance-led consortium was the famous Mohsin Issa and Zuber Issa (known as Issa Brothers) who co-founded Euro Garages. Issa brothers were together with London-based private equity firm TDR Capital to buy the Boots.

TDR Capital is working together Issa brothers to run Asda Stores Ltd, one of the most successful supermarket chains in Britain.

Boots UK Limited, founded as Boots the Chemists in 1849 has more than 2,200 shops in and around the United Kingdom.

Boots are into a variety of businesses such as clothing, photography, and beauty products, but mainly prescription and non-prescription drugs.

In 2012, American pharmacy store chain company Walgreen announced the purchase of a 45% stake in Boots to mutually expand the business in different geographies. After two years in 2014, Walgreen and Boots merged into each other when Walgreen bought the rest of 55% and hence both became subsidiaries of Walgreens Boots Alliance.