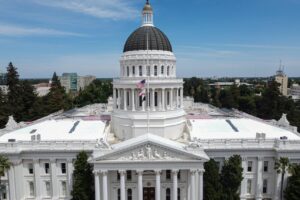 Social networking websites like Facebook and Instagram are owned by Meta Inc, and TikTok, and can reportedly face civil liability by the governing body of California for having some components on their website that purportedly has an adverse effect o the minors as these children get addicted to those features. These charges will be made under a draft that was introduced for the first time in the country and received an important vote in the state Senate on June 28.

This act would allow the chief law officer, district law officers, and the law officers of California’s four largest cities to take legal actions against the above-mentioned social media platforms under the country’s bill curbing inappropriate business practices. this act would further grant the cases brought into the court if an attorney is sure that the social media platform engaged in practices even after knowing that it would addict the children.

The act was adopted with an 8-0 vote at California’s Senate. While youth leaders, teachers associations, and consumer associations had backed the law on the morning of June 28.

A campaigner told the officials that when she was in her college there was a period when she used to spend around 14 hours or more on these sites per day. She further said that she was addicted to these platforms and it was turning harmful as looking at people doing things that she can not do or someone she cannot be like or look like was hampering her mental health.

The social media platforms should take some responsibility for this. The more the minors go through, the more revenue is generated for the platform, the campaigner said.

Spokespersons of Snap and Twitter refused to give their remarks on the act. While a spokesperson of Meta Inc claimed that this bill can not push the corporations to make any remarkable alteration.

This ruling has also faced disagreement from the Internet-privacy regulators. They claimed that this law could faint the gap between product accountability and freedom of speech.

The tech giants, Meta, Twitter, and Snap have separately campaigned against this new bill passed in California, as per the country campaigning disclosures. Among all the three companies, Meta Inc holds a dominant place in compelling the legislators to disagree with the act, as claimed by a number of people working at the council.

According to Meta Inc., it has already altered some of its guidelines and has made the age-verification codes on its platform stricter. It has allows allowed parents to restrict their minor’s use of the company’s social media platforms.