Researchers at Carnegie Mellon University have developed a new robot called PATRICK. This robot derives inspiration from a brittle star. PATRICK is a soft robot by nature and artificially imitates the behaviour structure of the brittle star. This robot has five legs which are equipped with shape memory alloy (SMA) wires. This feature allows the robot to crawl underwater.

The SMA is considered to be beneficial while carrying out a variety of activities. It is a metal which is capable of high flexibility at room temperature and displays a unique behaviour when heated or is being exposed to heat.

Zach Patterson, who is one of the researchers that carried out this study said that, “This work came about as a natural extension of our lab’s previous work in creating untethered soft robots using muscle wire in place of electrical motors. Our inspiration for PATRICK comes from the brittle star, a surprisingly agile relative of the sea star.”

When SMA comes in contact with an electric current or when an electric current is applied to it, it rapidly heats up and returns to the shape it acquired in the past. This robot was developed by Patterson and his team in order to carry out simple missions underwater. This would also mean enhancing knowledge and current understanding of the brittle star and what sort of crawling behaviour it depicted while being under water.

Explaining the robot’s features in details, Patterson said, “We use these shape-changing coils as a kind of ‘muscle,” causing the robot’s legs to bend in desired directions. The robot is mostly made of silicone, making it highly flexible and waterproof. In order to control PATRICK’s motion, we developed several motion primitives: specific patterns of shape change coordinated among the limbs that move the robot as a whole.”

In order to make the robot capable of moving around freely the researchers decided not to tether the robot to any external device. This would also allow the robot to replicate the brittle stars ability to crawl underwater in a more effective way. 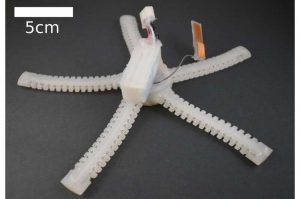 The robot PATRICK is also equipped with a wireless communication system. This framework which was developed allows the robot to communicate with other devices which are on the land or outside of water while it is submerged underwater.

PATRICK is also capable of sensing its surroundings and making a decision about what direction it should move towards, autonomously. This makes PATRICK able to do both the jobs, sensing the environment and also carrying out computations.

Due to its flexible and complex built, PATRICK can freely move underwater. Also, because of its intricate design it has proven to be quite difficult to predict this robots behaviour. But this mechanism also allows the robot to sense and react to any disturbances automatically by changing and deforming its shape. It is capable to perform all such tasks without any need for the expensive and highly performing control algorithms.

The team of researchers has claimed that this robot could prove to be quite useful for the coming years. It is capable of carrying out geological explorations and can conduct minimally invasive sampling.

Speaking about the future developments, Mr. Patterson said, “In our next studies, we will experiment with more control and planning algorithms, develop machine learning approaches for control, and implement sensors in the structure to allow the robot to tackle a wider variety of useful tasks.”