Watch: New Bipedal Robot, PedestriANS Can Change its Walking Style Based on Environment

It is no doubt that robotics technology is evolving and developing every day. What used to be a simple structure of metal has now become a full fledged device capable of making its own decisions with the help of machine learning. Robots are being used everywhere and for varied roles. From inspection, assistance to rescue we have seen the robots performing all these functions with ease.

Most of the features which are being developed for robots are those which human beings make use for getting by their day to day activities. For example, humans have this natural capability to adapt to their environment and change the walking style when on a particular type of surface.

When we are walking on an even ground, we usually speed up and if the ground is slippery we decide to slow down. This capability has been developed naturally among the humans. Navigating the environment is considered to be very essential when a machine is developed for the purpose of walking.

Similarly, when it comes to robots they need to be able to understand their environment and use appropriate types of walking behaviour. Under an ideal scenario, they must be able to adjust their structure as a response to changes in the environment around them.

In order to make this possible, a team of researchers at Osaka University in Japan has developed a robot named PedestriANS. This robot is bipedal in nature. This robot is capable of changing some of its physical characteristics and also the movement of its legs as a response to changes in its surrounding environment.

One of the researchers who carried out this study, Huthaifa Ahmad said that, “The main objective of our work is to develop robust robots that can handle disturbances; robots that can accompany humans and walk effectively over even terrains as well as uneven ones such as grass and gravel.To reach this goal, we need to develop robotic systems with an adaptive morphology; because even with most advanced bipedal robots that are available these days, having a precise model of both the robot body and the environment is crucial for them to operate properly.”

This robot is capable of changing its walking style with the help of a simple system which connects the movement and configuration of its both legs. This robot was presented in a paper published in SAGE’s journal Adaptive Behaviour. 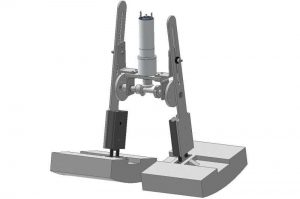 This robot is equipped with an actuator network system (ANS). A single motor has been employed in order to enable this robot to produce its movements. ANS is used to link this robot’s legs together.

Speaking about the involvement of an actuator network system (ANS) in research, Ahmad said, “As its feasibility was demonstrated in several studies, I am currently using the ANS principle in my research to achieve adaptable robots, by utilizing the different interactions among the mounted actuators on their bodies.”

This robot had to undergo various evaluations in order to prove its capability in a series of experiments conducted by the researchers. This robot can prove to be extremely useful to complete tasks that demand moving around, uncontrolled in a continuously changing environment.

Speaking about what comes next in their research; Ahmed said that they will be trying to fit the ANS in other parts of the robot for better performance.