Japan has always been on the forefront of technological developments. The high tech robots, digitally mechanized systems are not something new to this country. With every passing day the Japanese technology escalates to new highs of robotics and technological developments. Robots can be used for varied purposes, as we know by now, and they have been proved to be extremely capable of performing tasks much better when compared to humans.

Recently, a Japanese grocery chain called FamilyMart in collaboration with Tokyo Startup Telexistence is planning to come up with a new robot. This robot is named as Model – T and its job will be to restock the grocery shelves. This robot can be controlled with a remote.

The Model T robot stands approximately seven feet tall. This robot is capable of performing varied functions such as grabbing, turning, lifting and placing products on the shelves as it is equipped with a wide range of motion. One of such robots has already been deployed in one store from this chain.

Telexistence, on its website revealed that the main purpose behind developing this robot is to address the labor shortage crisis which Japan is going through right now. Deployment of this robot will also increase the implementation of social distancing during the Corona pandemic.

Once such robots are deployed, it will be possible for a single worker to service multiple stores from a remote location, according to a representative from Telexistence.

This will provide with a two fold benefit, the first one being reduction in labour costs involved. As many companies are now suffering losses because of the Corona pandemic, this will prove to be a great help for them. It will also allow companies to provide the employees with a better safety feature. Second benefits will be, on the customer side. Since its a robot the customers will have to face limited exposure to the virus. 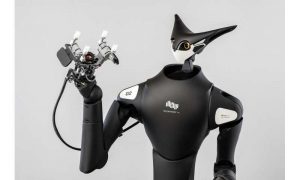 This robot can be controlled by a remote and the human controlling it is known as the ‘pilot’. This pilot makes use of a virtual reality (VR) gear from a remote site such as their home or any such location. These pilots are able to control Model T by using their arms, legs and hands. Since the robot does not contain any in built intelligence, the pilot is required to carry out every movement which is performed by the Model T.

The company has recently released a video on YouTube which depicts the pilot and the robot working together in order to load drink bottles from a cart on the store shelf. Compared to a human performing this task by physically being in the store, this action is much slower. However the researchers hope that over the period of time, the robot Model T is expected to get much faster at work.

At the current stage, the robots are used only to stock PET bottles on shelves but the researchers are certain that as soon as this robot proves its capabilities in the tasks its performing they will expand its abilities. For the next plan the robot will be able to stock rice balls, sandwiches and other practical items on the shelves. For future endeavors, the company is aiming to place Model T in 20 FamilyMart stores over the next 2 years.