Watch NASA’s SpaceX Falcon 9  Crew 2 Dragon’s launch Live, get to know the crew members and the rest of the team involved. They meet their family members and friends as they leave to take off, only to come back by 28th April.

The view is from the two cameras available. Viewers keep viewing as the Falcon 9 Dragon continues to go into space. Stage 2 continues to climb. Everything is normal as per the records, and the crew confirmed the same.

Eventually, as the rocket goes to space, you can watch the Dragon getting separated from Falcon 9. The launch is considered a successful launch after their separation. You can watch the astronauts in their seats, as they report to the station on earth.

“Journey to off the earth for the earth”

Dragon has separated from Falcon 9’s second stage and is on its way to the @space_station! Autonomous docking tomorrow at ~5:10 a.m. EDT pic.twitter.com/rg1QjZEl9u

Launch: The rocket is fired up. As it goes into the sky, the tail fire can be seen in the sky. 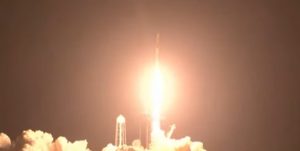 40 seconds: The dragon is ready.

2 minutes to go: Dragon has transitioned. Stage one logs load is complete.

4 minutes to go: Waiting for the clampOns to open up.

6 minutes to go: The second stage is filled with kerosene. And waiting for stage one to fill.

10 minutes to go: Shane gives a small goodbye speech, thanking friends and family. The crew is being wished by the team members, for a good journey and to enjoy the journey.

If you were there 2 hours before while the crew was suiting up, Elon Musk came to the scene and he can be seen in the video. Also, he tweeted about the launch.

One hour before the Launch

30 minutes to go: Live team talks about fuel loading and unloading. Additionally, he talks about the hissing sounds caused by pressurization systems. This time they are going to have an instantaneous launch option. In case something is to happen, the launch can later happen only after three days from now.

40 minutes to go: The hatch is being separated from the crew arm. And the launch escape system is armed. The Falcon 9 Dragon launch escape enables the rocket to abort and escape anytime after the launch. When you look clearly, the booster actually looks dirty, as it was already used once. 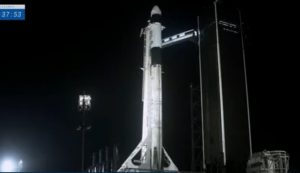 We are a GO for launch of NASA's SpaceX Crew-2 mission. The crew access arm has retracted and the astronauts have lowered their helmet visors. Propellant loading will begin shortly. pic.twitter.com/PFSFa0CYkF

50 minutes to go: Everything is going smoothly, and the checks to ensure the functionality of the parts is being done with time. Two astronauts are to spend six months in the space station, while the other two will return.

The plans for the next crew, crew 3 are such that, by the next launch, the astronauts are to replace crew 2.

The launch team is getting ready, for propelling and some final preparations. They are waiting for the call for propellant loading.

The crew is going through their steps ahead of schedule and are passing the extra time aboard the Crew Dragon spacecraft with a couple of rounds of the game. pic.twitter.com/1MUSHQUnyi

At this time, it turns out that the “rock, paper scissors” wasn’t the game at all. It was some game Shane learned during his childhood days. The crew is getting connected with old memories as they pass time while waiting for the launch.

One hour 30 minutes to go: SpaceX is getting ahead of the scheduled time, like their previous launches. The astronauts are waiting and trying to pass time, keeping company. We can see the launch pad, and as each minute passes the checking is going on.

Why does it take so much longer for the Crew Dragon to get to the ISS than the Soyuz? #LaunchAmerica #AskNASA #NASA #SpaceX #Crew2

Meanwhile, the live team answers this question on why it takes longer for the Crew Dragon. They answer that it depends on the distance and that Falcon 9’s Crew 2 is expected to reach the international space station within 24 hours.

Furthermore, they answered another question on added features on this rocket, in addition to the rocket launched last year. The answer mentions adding components that improved the rocket’s performance. And is expected to be more effective than before.

They are set to put the first woman and first man of color on the moon and eventually on to the mars. There are so many factors to consider, from health checks and the state of the astronauts in space.

This is the third crew to cross the orbit. Also, the current Falcon 9 Dragon crew is to join the existing crew team in the international space station.

✔️ The crew is settled in and the hatch is closed on the @SpaceX Crew Dragon spacecraft.

Two hours to the Launch

2 hours 4 Minutes to the launch: As the live telecast team answers the questions asked on social media, the astronauts play paper, rock scissors inside the rocket.

The technical team is doing a leak check at the hatch of the rocket (door). It isn’t as simple as closing a door and is taking time to check, re-check and adjust.

#LaunchAmerica What kinds of research will the Crew 2 astronauts be doing aboard the ISS?

Furthermore, the live team is answering the technicalities of the rocket, of why the team can’t directly board the rocket and had to travel 15 min away from the suit-up place. They also answer the question of what kind of food the astronauts are going to eat. The food is going to be normal ones, however, depending on the astronaut, the taste can change at times.

The four Crew-2 astronauts walk out from the Neil Armstrong Operations & Checkout Building at @NASAKennedy ahead of their journey to the launchpad: pic.twitter.com/2NqYTTGBZL

2 hours 15 min to go: The checking of the suits is finished by now. At Kennedy space center the engineers are getting to the station. The weather forecast continues to be acceptable.

The monitoring is consistently taking place as we watch the live stream. It is all positive for now.

As the checking takes place, everyone is curiously waiting for the launch to happen.

Three Hours to the Launch

After the astronauts got fully ready into their suits, they took a picture with the whole team. The team includes the suit designer, making sure the astronauts are comfortable and warm.

As you can see the room has around 2-3 logos of the crew-2 team. The logo with the dragon represents the strength of the team.

With the hashtag #LaunchAmerica, the audience can ask NASA SpaceX questions about the launch and the rocket. Some questions have been answered. One of the questions includes how many times the booster can be used. They answered that SpaceX has permission to launch the same rocket 5 times for now, but they are yet to explore the possibilities.

I've 2 questions
1) How many astronauts can be in the ISS at the same time ?
2) Are the astronauts ready to use the new abort system and are they confident it will work as intended ?#LaunchAmerica

The live stream started at 11:00 AM. The audience is getting an overview of the team, space suits, launch details as the astronauts get ready to board. Every Member’s story is unique and they have a special connection with Falcon 9 Dragon Launch.

As the launch is going on, we get to know the team and how well they get along. In between, they also share a picture, where the team was enjoying on a beach one day before the launch date.

The calm before the storm L-1 #Crew2 @NASAKennedy pic.twitter.com/bp6z2zTBNl

This is the first time SpaceX is using the Reused Falcon 9 which is because of their booster. The Launch was originally scheduled to launch on Earth Day, 22nd April, but due to weather conditions, there was a delay.

Megan McArthur was first selected as an astronaut in 2000. This is her second time going to space. Interestingly, her husband, Bob Behnken was part of the Crew 1 launch. Megan will be sitting in the same seat, where her husband sat last year.

As they get ready to get on board, her husband and son come to say their goodbyes. Megan and Bob Behnken are both considered a true power couple. Must be an interesting experience to have mom and dad both as astronauts.

We're at L-1! On launch day, we'll be driving out to the pad about now. If you want to rock out with me, here's what I'll be playing:@foofighters Learn to Fly@ChiliPeppers Give it Away@OzzyOsbourne Crazy Train@Metallica Enter Sandman@GreenDay Waiting
What would you play?

One day before the launch, Pesquest shares his time spent with the team on the beach. Pesquet is a French astronaut, with SpaceX Crew 2 being his 5th journey to space. He is the first European astronaut to go to space from an American space station after more than a decade.

Furthermore, he is popular in Europe and has an influence on European politics, the economy, and other crucial areas besides being an engineer. Shane Kimbrough is considered the one to lead the team. He is known for his leadership, also the one who spent the longest time in space among his crew members. In 2008, he spent STS 126 days in space. Alongside, he had performed two spacewalks.

"I love it, it doesn't matter what I'm flying, it's just incredible." — @Astro_Kimbrough, Commander of NASA's SpaceX Crew-2 mission, and retired @USArmy Colonel, is making his third spaceflight. He's logged 189 days in space and has performed 6 spacewalks. pic.twitter.com/dCQlX4MuIJ

Akihiko Hoshide has a degree in mechanical engineering and aerospace engineering. Also, the Japanese engineer was earlier selected for ISS back in 1999. As he was speaking about the current SpaceX mission. Also, he said he didn’t think he would be part of this mission. Such kind of excitement is overall the astronauts present in the crew.

Furthermore, this is the food that all the members of the crew had before the launch. A similar picture was shared by Thomas Pesquet too, prior to the launch preparations on how hard the team is working to provide everything.