Watch: New Robot That Can Climb and Walk SQuad, the Mini Robot

Each day the world of Robotics presents in front of us a new achievement. No matter what the product, its main goal is to work alongside humans and to make our lives simpler. There are many robots with different abilities active in different sectors which are making the work environment safe for the workers and are also proving to be beneficial to the company.

To add up to a new achievement in the Robotics industry, researchers at the Bilkent University in Turkey have developed a robot called SQuad. This robot is quadruped in nature and is miniature in size. It is completely made out of soft structural materials. All the information about this robot is published in a paper in IEEE Robotics and Automation Letters.

According to Onur Ozcan, who is one of the researchers who carried out the study, “We have been working on miniature robots for almost a decade now. Even though miniature robots have many advantages, such as being cheap, as they require fewer materials, and the ability to access confined spaces, one of their major drawbacks is their lack of locomotion capabilities, especially on uneven terrain.”

Completely made out of soft structures, this robot is more flexible in nature when compared to its counterparts available in the market. This quality makes it easier for this robot to climb over obstacles in its journey. This palm sized robot is made out of polydimethylsiloxane (PDMS) which is a soft material. This robot has four legs which help it to move around its surroundings. 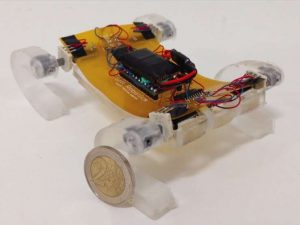 Speaking about its fairly new and unique legs, this robot is equipped with soft C shaped legs. These legs have DC motors integrated in them which are responsible for the rotation of this robot.

The robot SQuad had to undergo numerous tests in order to prove its efficiency. It was tested against a similar robot which was made out of rigid materials. It was put under a series of experiments in order to compare its locomotive performance with that of the other robot. It was found out that SQuad could outperform the other robot with a significant margin and was able to climb over obstacles in a much effective way.

When comparing both these robots’ performance it was found out that SQuad was capable of climbing over obstacles that were 1.44 times taller than it, it climbed over with an ease. Whereas the other robot which was made out of rigid materials was able to climb over obstacles which were 0.88 times its body height.

Speaking about this Ozcan said that, “The difference we observed in scalable obstacle height arises from SQuad’s body compliance. We think that with such an improvement we can use this robot for inspection purposes (with a small camera added on board), or to find survivors under a collapsed building (again maybe integrating a camera and a microphone for detecting survivors).”

This robot’s miniature size, high level of flexibility, body compliance and its ability to climb over obstacles with an ease makes it very useful when it comes to performing tasks which require crawling through small openings and to move on uneven and unstructured terrain. It could prove to be a very useful tool to inspect areas where, for example, a building has collapsed. Ozcan and his team are in the process of constantly updating the design of this robot.