Watford, a soccer team, will wear Dogecoin on its kit sleeves.

In the 2021-22 English Premier League season, Watford, a newly promoted soccer club, will wear Dogecoin on their uniform sleeves.

In a sponsorship deal with Stake.com, Watford FC will wear Dogecoin on their sleeves.

According to the website, the agreement will net the soccer team some £700,000 (around $970,000).Watford and Stake.com announced their relationship earlier this month. According to the news release:

The multi-year agreement joins together one of the fastest-growing cryptocurrency brands with a Premier League challenger looking to make their mark following promotion from the Championship last season.

“To honor the start of the collaboration, Stake will launch crypto-themed promotions, including a 10 million Dogecoin giveaway on its international platform,” according to the website.

From 2015 through 2020, Watford FC competed in the English Premier League, reaching the FA Cup final in 2019. The team, however, faced relegation in 2020 and was forced to compete in the Championship. Despite this, the club is back in the top flight this season after only one season in the second tier.

Stake.com is a well-known sports crypto casino and betting site that handles over 5% of all Bitcoin transactions. The firm believes that the arrangement with the soccer club will assist raise awareness in the country with the launch of the UK website.

The club’s previous sleeve collaboration with Bitcoin was worth roughly a million pounds. If the Dogecoin transaction takes off globally, the club will be able to make more money than before.

Stake.co.uk CEO Mladen Vuckovic comments in the website press release, “We could not be happier to associate with a club that has such enormous history yet still has a truly revolutionary spirit.” We’re devoted to becoming an integral part of the Watford family, and we have a lot of interesting initiatives in the pipeline for supporters!

Dogecoin’s price is now hovering around $0.28, up 8% in the last seven days. The cryptocurrency has gained 42 percent in the last month.

The graph below depicts the value of DOGE over the last three months: 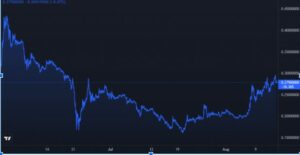 While this isn’t the first time Dogecoin has been mentioned in a sports context, it is by far the most high-profile. This sponsorship arrangement might be enormous for DOGE because Watford FC plays in the most popular league in the world.