The Launch Video of Weilan AlphaDog

Boston Dynamics always surprises the tech world with their out of the ordinary innovations in robotics field. The robots which are developed by them are well regarded for their functionality. The four legged robot, Spot was recently utilized by the French military in order to understand and evaluate the difference robots make in the military.

Currently Boston Dynamics are considered to be the leaders in the robotics industry. The robots that are developed assist in a lot of things according to their program and the instructions given. They are functional even in the restaurant and the medical industry. Most of the time, robots are preferred to carry out duties which are considered to be too dangerous for the humans.

Along with this, there is also a growing demand for robopets. Robopets are the robots which utilize Artificial Intelligence (AI), to sometimes carry out extraordinary tasks. Weilian, a Chinese tech firm has now launched the AlphaDog, a much cheaper version of Spot in the market. The current market price of Boston Dynamic developed Spot is $74,500 dollars whereas AlphaDog which is already available for purchase in China costs 16,000 Yuan ($2,400). 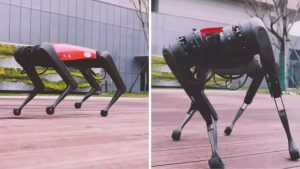 AlphaDog employs sensors and Artificial Intelligence (AI) in order to perform a wide variety of tasks. The company Weilian claims that upon further updates the robot dog will be able to perform tasks such as guiding the visually impaired, barking and will also be able to follow and act upon the voice commands from its owner.

AlphaDog is equipped with 5G technology which allows it to carry out tasks autonomously. On the very first month of its launch more than 1,800 units have been sold of the AlphaDog. The company Weilian claims that the robot AlphaDog is very similar to the real dog. This robot can achieve the maximum speed of 9 miles per hour. This makes it one of the fastest robots available in the market.

This robot dog has been proved to be becoming more and more popular amongst the people. Especially the computer developers, tech enthusiasts and the kids have shown a keen interest to purchase this robot AlphaDog.

Ma Jie, the Chief Technology Officer for Weilian said, “It can predict the friction and height of the ground (to) adjust its height, adjust the stride frequency, and adapt to the environment.” Speaking about the robots functionality in order to assist people, he further added, “To help the disabled is an important developing direction for us. When the robot dog has the function of vision, hearing, and dialogue too, it can easily interact with disabled people, and lead them to the supermarket or the bus.”

The company also has developed a larger model of this robot in order to be utilized for the industrial purposes. This robot can be used to carry out duties such as industrial inspection and maintenance of machinery.

The company is currently focused only on the commercial markets and not on businesses. In the demonstration video that was released by the company Weilian, we can see that the AlphaDog too is capable of keeping its balance stable after being kicked by one of its human creators, similar to Boston Dynamics Spot.