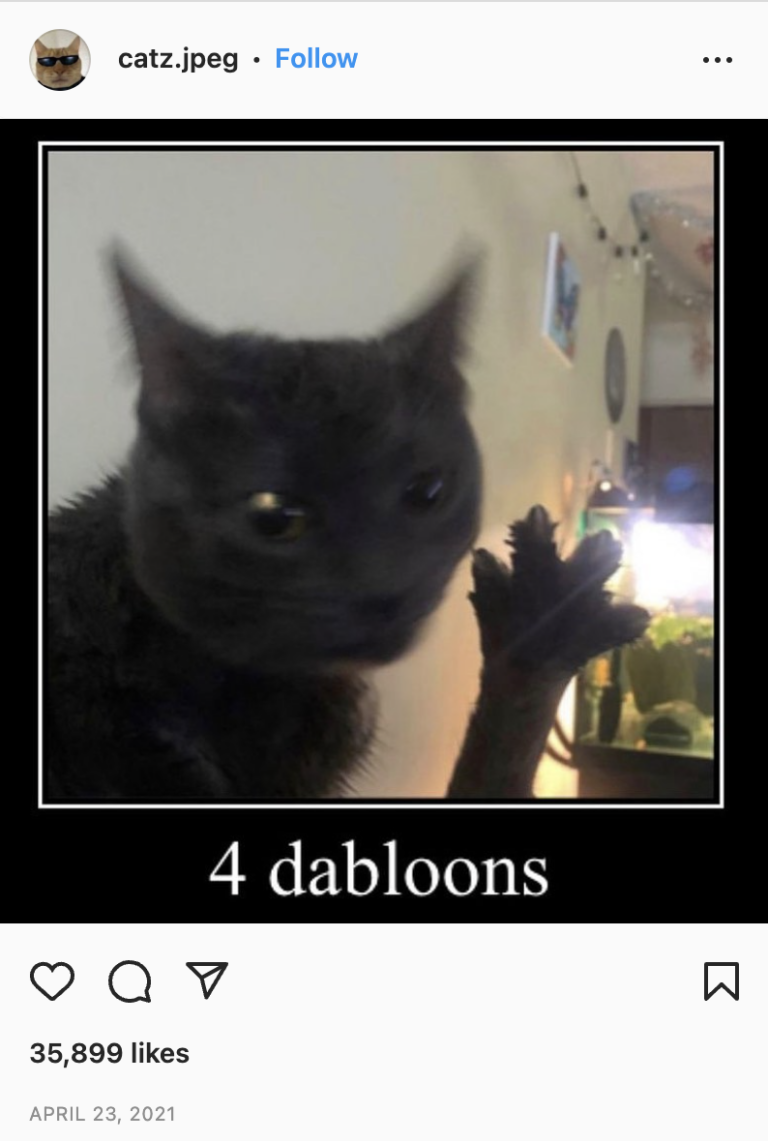 Tiktok has recently been engulfed by some ‘dabloons’ revolution, and the entire community is going nuts over it. But what exactly is this, and should you also participate in this viral trend? Let us have a look! However, before we start, I hope you like cats, XD!

What are dabloons on TikTok?

The word ‘dabloon’ comes from ‘doubloon’, a 16th-century Spanish coin. This emerging trend is based on Tiktok users collecting this currency which is obviously fictional (like monopoly) and exchanging it with imaginary items like weapons, food, collectables and more.

But how do you earn this imaginary currency? Well, you just have to keep using Tiktok. Whenever you come across a video offering you coins, you get them. And it will most probably be a cat giving you gold coins. The video imagines the user scrolling as a hero who is on a journey to scroll TikTok videos. So, the dabloons are rewarded for the same.

i offer you 8 dabloons pic.twitter.com/vv8mDtnKfD

If you think about this, there is no real meaning to this trend but then why are people going crazy over it? Well, because it’s fun. Who doesn’t like to have some casual entertainment over the internet without any stress? We all do.

In this game, there is nothing that actually tracks your dabloon balance or what you own or don’t. However, it’s not fun to play if you cheat in the game because you are not actually winning or losing but just missing out on the fun.

Why are cats a part of this economy?

Cats are the base of this entire trend. You can see that the videos and tweets that are offering dabloons to visitors on their way have their paws clearly shown. The number of paws signifies the number of dabloons they are offering to the visitor. 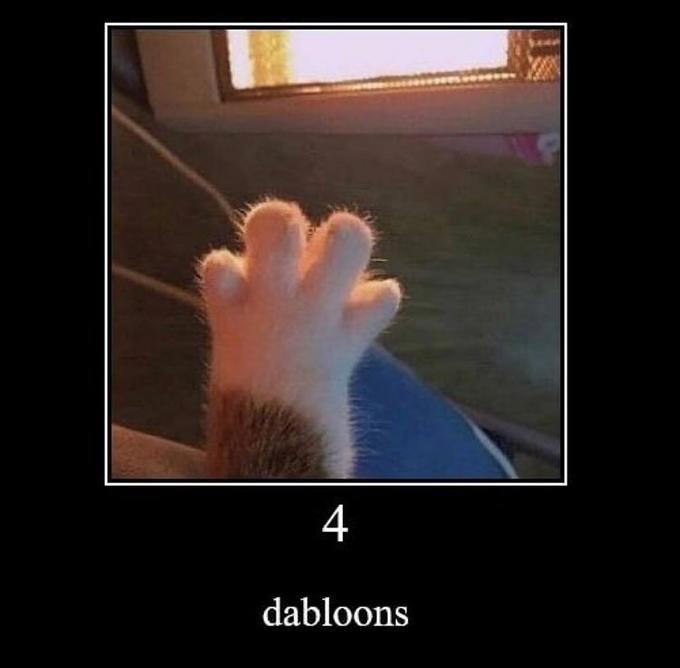 For example, in this, we can see 4 toes in the cat’s paw in the image, making it 4 dabloons. Now, even there is a story to this on why cat paws are correlated with the coins that hold value in this trend. The cat is considered the salesperson here, and the number of paws indicates how much the transaction amount is.

Where did this trend begin?

One cannot say for sure where the roots of the dabloon economy lie, but yes, there is some information about where it might be from. The website “know your meme” says that the meme might have begun from an Instagram account, catz.jpeg. The post that began this was the paw of a cat and the caption “four dabloons”. It’s not something that happened recently. 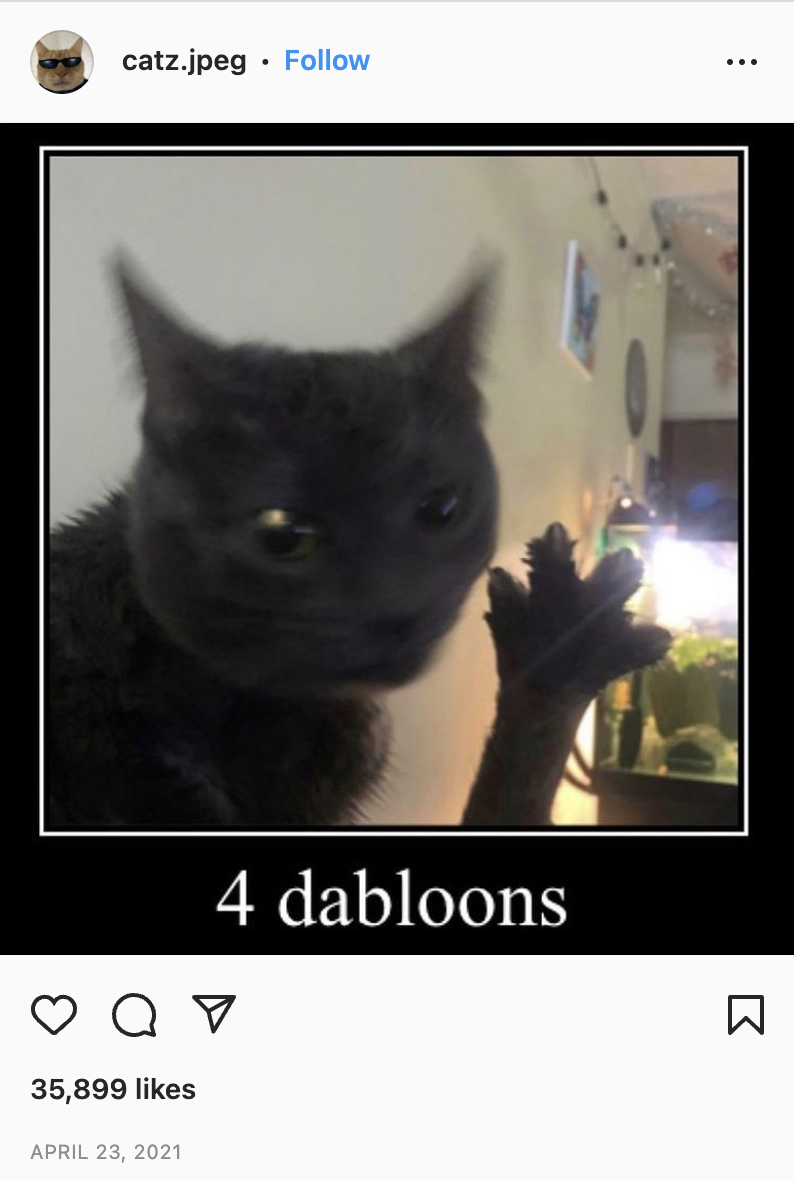 This trend has been going on for months, and the number of users watching and posting dabloon videos is going up every day. The hashtag has already gained more than 500 million views as of 25th November 2022.

High inflation in the dabloon economy

What started as a small trend has now moved to a whole new level. The dabloon economy was thriving when there wasn’t too much cash around, and the prices of goods like jewels, food, and houses were affordable. But now, there is too much inflation. If you start scrolling on Tiktok, it’s likely that within some time, you will be able to acquire hundreds of this imaginary coin.

pissed off by all the “hello traveler here are 10,000 dabloons” tiktoks what are you DOING you are causing irreparable dabloon inflation that’s what you’re doing

However, that doesn’t mean you will be able to buy anything you like because the prices of things are also skyrocketing due to inflation. There are exclusive merchants who exploit people by offering merchandise at high rates. At the same time, the dabloon community has also been filled with thieves who are stealing wealth from others, so who knows, you might get looted.

So, now the FBI has stepped in to ensure that your dabloons are protected from thieves. At the same time, the IRS is looking into the bank details to ensure that people are not giving away too many dabloons in one video. In the near future, we might even see them limit the giveaway of dabloons on videos to 100 and limit the price hikes on essential items like soup.

Have you participated in the dabloons trend in Tiktok? Or do you think it is just not for you? Let us know in the comments below. And, if you found our content informative, share it with your family and friends.