What is the Whatsapp’s Disappearing Messages feature and how to enable it?

WhatsApp- the lion of all the messenger out there just keeps coming up with new updates. WhatsApp has recently launched its ‘Disappearing Messages’ feature! The disappearing messages feature is now available and will be given access to the users during this month. It will be easily available to all the devices that support the algorithm of WhatsApp, including iOS, Android, Linux-based and KaiOS devices too. 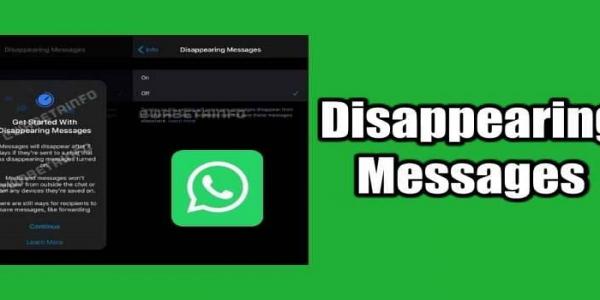 What Whatsapp has to say about the new update?

Since we like to stay ahead of time, we’re here to tell you all about the new Whatsapp disappearing messages feature. This brand new feature claims to be available to individual chats as well as WhatsApp groups. However, in the case of Whatsapp groups, only group admins will be available to enable or disable the new disappearing messages feature. The Whatsapp company which now Facebook owns says that their main objective to release this feature is to ‘to make conversations on WhatsApp feel as close to in-person as possible, which means they shouldn’t have to stick around forever”.

“That’s why we’re excited to introduce the option to use disappearing messages on WhatsApp. When the ‘disappearing messages’ feature is turned on, new messages sent to a chat will disappear after 7 days, helping the conversation feel lighter and more private’, said Facebook in a statement.

Talking about the announcement on Twitter, Whatsapp says- ‘”Because not all messages need to stick around forever.” About the seven day concept, Whatsapp says- “We’re starting with seven days because we think it offers peace of mind that conversations aren’t permanent while remaining practical so you don’t forget what you were chatting about. The shopping list or store address you received a few days ago will be there while you need it, and then disappear after you don’t,”. Which imples that once WhatsApp disappearing messages feature comes into play, messages will disappear within seven days. This will be applicable for both individual messages and group chats.

1. Whatsapp explains that this feature will not affect previous messages on WhatsApp.
The all-new Whatsapp Disappearing message will not just wipe out text messages but also photos and videos. If you wish to save the Whatsapp messages, we will suggest you to take and keep the screenshots. Another way with which you can save WhatsApp messages is to copy them.

2. After Whatsapp releases its new feature, you might want to read the messages within one week, since after 7 days the chats will disappear. However, you can read the messages from the notification bar without opening WhatsApp.

3. When you use the ‘Reply’ feature, Whatsapp quotes the initial message. Later, the quoted text might still stay in the chat after 7 days.

4. If you forward a disappearing message, the message will not disappear after 7 days.

Here is how to enable/disable Whatsapp disappearing message-

How to disable Whatsapp disappearing message