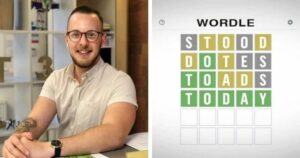 The brains behind the game, Wordle, Josh Wardle, revealed why he was compelled to sell off his immensely popular word game to The New York Times. He listed the reason of how many were cloning it and profiting from it without the permission from the owner. Wardle is a software engineer of Welsh ethnicity and resides in Brooklyn, New York. He made the revelation in a talk on Thursday, March 24. The software engineer specified that selling his game was “a way to walk away” from pressure he experienced to put an end to the exploitation of his game.

Currently, over 300,000 people play the free web game daily, specified the Times. The Times paid an amount between $1 million and $5 million to gain ownership of it this January. The immense popularity and reach of the game inspired countless mobile apps to just copy Wardle’s creation. To their versions, they profited by putting in ads, in-app purchases and subscription fees. With the growth in the number of these apps, Apple took the step to later remove all of them from its App store.

Speaking at the Game Developers Conference in San Francisco, Mr Wardle said: “That isn’t money that I would have made, because I said I don’t want to make money, but something about that felt really deeply unpleasant for me.”

Wardle went on to mention how selling Wordle to the New York Times turned out to be a path for him to escape from the constraint. He added that he did not want to pay an attorney to “issue cease and desist” on the game from which he was not even making money. Moreover, the intense complication building up was just adding to the stress he was already facing from it. He experienced intense “pressure” and time constraint with the rate the game was being copied.

Got to see Josh Wardle @powerlanguish aka creator of Wordle himself today at GDC! Very heart warming panel about a simple game created for his girlfriend, which he quickly scaled for millions of users for ~$100 a month 💌 pic.twitter.com/g58hBYrArw

Elaborating, he pointed out he was never interested in the business side of the game. He clarified that others monetising did not compel him to sell to the Times but how miserable the race made him did. Additionally, he spelt out the instances connected to the game that him feel proud of his creation. Specifically, he knew of individuals around who reconnected with their families or friends through the game.

Recently, following The New York Times’s takeover of Wordle, players expressed dissatisfaction with its new feature. Wordle, which was free of ads for customers, added ad-trackers in February.Though it appeared the same, it had prey to profiters.