Will Ethereum ever surpass Bitcoin in value?

Ethereum has also proven to be a market leader, with rising prices and little volatility. The key question up until now has been whether Ethereum will ever surpass Bitcoin in terms of value. 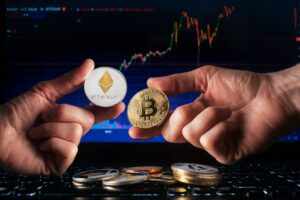 Diversification offers considerable benefits in the digital currency market, just as it does in most other asset classes. Instead of merely holding Bitcoins, savvy investors might consider possessing a small collection of different coins.

Although the Bitcoin and Ethereum networks appear to be similar, their overall goals are very different. Bitcoin trading began as a secure alternative to traditional money, as well as a way to keep transactions private.

It was a way to hold value and have a medium of trade that was not controlled by institutions. Ethereum, on the other hand, plans to use its platform to host its currency as well as apps and immutable digital contracts. While ETH is a digital currency, its primary goal was to make smart contracts easier to use and ultimately commercialize, as well as create a decentralized application platform (dapp).

From the beginning, the number of Bitcoins that could be mined was limited. The coding of the originator set a limit of 21 million Bitcoins. Currently, the total amount of Bitcoins mined is just around 19 million. Furthermore, after every four years, the reward for mining Bitcoins will be reduced by half.

The procedure is known as “halving,” which means it will prevent an unfair rush to mine the remaining quota, resulting in price distortion. As the number of Bitcoins in circulation grows, the coin will naturally become more scarce, resulting in increased value.

On the other hand, there is no limit on the number of coins that can be mined, nor are there any restrictions based on a percentage of the initial supply. Bitcoins, on the other hand, need more processing power, electricity, and related costs to mine on the blockchain, making Ethereum more profitable for miners. Miners prefer Ethereum because it is less expensive and more rewarding than mine.