The Tesla Model X featured by the Stauffer Garage Youtube channel was different from a regular Tesla car which everyone is aware of. The car was fully filled with clutter like chips, mayo, and other kinds of food, paper, a baby Yoda doll, etc. Almost every part of the interior needed cleaning and re-cleaning. Micro vacuuming itself took more than 10 minutes in the video being played at a faster pace. 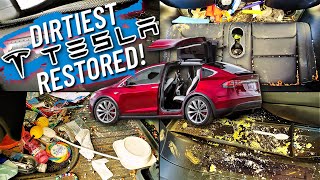 Though the car is not compared with any other dirty car, this evidently looks like one which no one could imagine themselves driving in it. It could be considered the dirtiest Tesla ever featured online. The Stauffer Garage team does clean every nook and corner of the car. In the end, the Tesla Model 3 is as good as a new one.

As the change started by removing the items with hands, the next part of the restoration was carpets, door panels, and the rest of the cabin. Every detail is cleaned perfectly which makes it interesting. Only the interior was dirtiest, but this caught the attention of many because Tesla users are usually the ones who are into electric vehicles. Being a user who purchased the car long back when the car wasn’t global, it could possibly mean the buyer supported sustainable products. There are times when more dirtiest cars were seen, or when the Tesla car needed more work because of damage or replacement. Being dirtiest is a first which was ever featured online.

Bringing back the glory

Watching the Model Y getting back its glory little by little is satisfying. Interestingly the Model Y seemed resistant to permanent damage. Clearly, the team only had to clean thoroughly and not replace any item. Like the seats with gum and melted candles and it could be cleaned and wasn’t replaced. As the battery of the car and infotainment system were both working in the car, it was rather easy to restore an old car.

While some dirt could have been recent ones, and others with older dirt or which are hard to get rid of, the result is miraculous. Tesla cars are known for having simplistic designs, which are also considered futuristic. It is evident that the feature came in handy while restoring an old Tesla. Next time a Tesla user worries about dropping food or gum in the car, they can now feel assured that it can be cleaned despite being dirty.