Twitter had announced its first brand bracket competition last week, sparking excitement among users as well as popular brands, also igniting a sense of competition among them. The goal of this initiative was to determine the best tweeting brand on the platform. This competition pitted popular brand profiles with each other and Twitter users were asked to vote for their favorite among them. At the end of it, Twitter would announce the victor, which would be revealed after 15 head-to-head battles.

The choices for brand profiles were categorized into four brackets;

Sports Twitter consisted of Budlight, Gatorade, the GEICOgecko, and MrPeanut.

The winner of the fierce battle was Microsoft-owned Xbox. Users showed their love for the gaming brand by granting their votes to Xbox on its final face-off against Skittles. 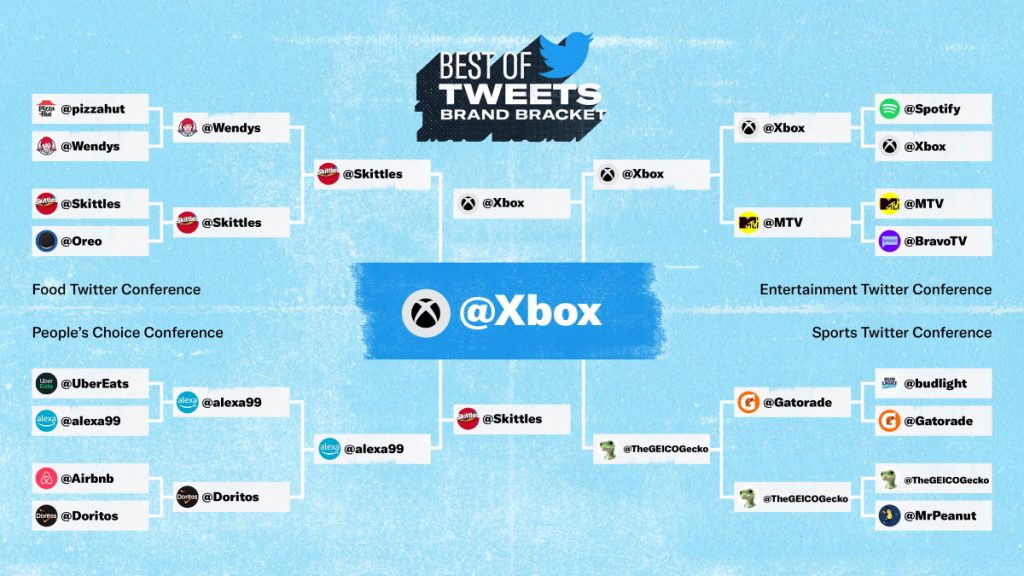 After the results were displayed Twitter announced that the matchups were heated and the promotions from several brands saw an increase in support among the participating brands, with some even offering a variety of products tied into the event. But it was Xbox that emerged as victors in the end. The world-famous gaming company has more than 16 million followers, and tweets more than 30 times per day, giving out replies. This aspect of Xbox in which its social media team is highly active in responding to mentions on the platform and giving out replies and information is what makes it a hit among users.

Xbox will also be given a special trophy from Twitter to mark their win. Their victory has been flaunted in almost all social media handles the company owns and has acted as a good stimulant for promotional pitches. The announcement from Microsoft’s GM for Xbox marketing Aaron Greenberg, right before the final vote also provided the company with a boost, propelling the company into victory against skittles. He announced that Xbox would release a mini-fridge that had a resemblance to the design of an Xbox console. He also announced that the first fridge coming out of the production line would be given to Skittles. Discussions on making a fridge had emerged as a response to memes back in the year 2019. Last year Microsoft had delivered a custom-made, full-size fridge to American rapper Snoop Dogg and Dwayne Johnson as a part of the promotion fan giveaway around the release of the new console.