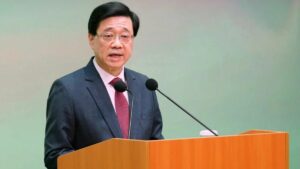 On Wednesday, April 20, YouTube blocked that account of John Lee, the sole leadership candidate of Hong Kong owing to US sanctions. Whereas, Facebook’s parent company, Meta Platforms said that Lee could keep his account, however, not use its payment services.

Essentially, this move follows the US sanctions placed on Lee and other officials from Hong Kong and China in 2020. According to Washington, the sanctions were due to their part in curbing the city’s freedom under law. This is the national security law imposed by Beijing in June 2020. The step from YouTube has no connection to Lee’s chances of winning the election. YouTube’s parent company, Alphabet Inc stated that they took down Lee’s campaign account to follow US sanctions as law under its terms of service. This blockage occurs as the former security chief and No.2 official of Hong Kong gets ready for a leadership election on May 8, 2022.

“Google complies with applicable U.S. sanctions laws and enforces related policies under its terms of service. After review and consistent with these policies, we terminated the Johnlee2022 YouTube channel,” the company said.

Meta said that Lee could keep his ‘demonetised presence’ on its platforms Instagram and Facebook. However, the social media company had moved to prevent him from using any of the payment services. As of Wednesday, Lee’s page on Facebook was still visible.

The former deputy police commissioner said that the step would not have any impact on his campaign to lead Hong Kong for the coming five years. He called the sanctions imposed by the US ‘unreasonable,’ ‘bullying,’ pressurising him to be ‘hesitant.’ Moreover, he stated that that such ‘unreasonable’ actions from the US is further reassuring him that what he is doing the ‘right thing.’ He went on to also specify that inaccessibility to these platforms would not affect his agenda.

Lee has Beijing’s support and hopes to replace Chief Executive Carrie Lam. Lam is expected to step down on June 30 post governing the city at the time of unprecedented anti-government protests and the pandemic. On the other hand, Lee is set to announce his platform this month itself.

Lee has joined hands with politicians and powerful businessmen, such as the richest man in the city, Li Ka-shing, who will join his advisory team, supporting his candidacy. Moreover, Lee is expected to prioritise security problems if he gets the top position. Previously, he had pushed new legislation to entirely implement the imposition of the sweeping national security law in Beijing. Authorities in China and Hong Kong agree that the law was required to bring back stability after the anti-government protests.