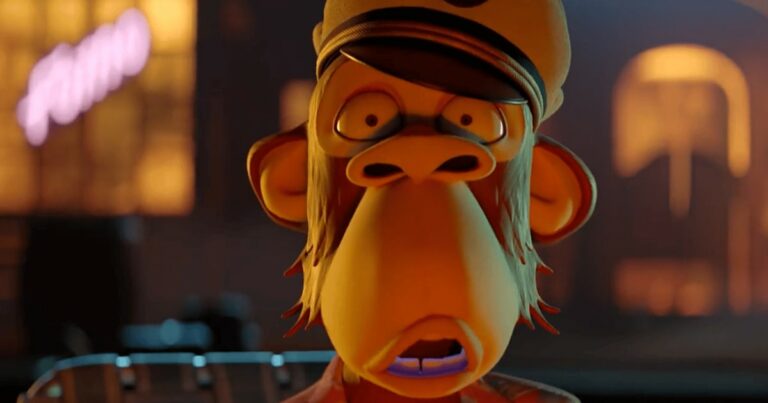 Yuga Labs, the NFT creators behind the glitzy Bored Ape Yacht Club, released a teaser for what looks like a forthcoming metaverse called “Otherside”

Their post highlights  ApeCoin as the potential token to be used for the new creation. ApeCoin was launched last week by ApeDAO and was claimable by Bored Ape Yacht Club and Mutant Ape Yacht Club owners along with being offered for trading on major cryptocurrency exchanges like Coinbase Global Inc, FTX, Gemini and eToro on its inaugural day.

The video centers on the launch of Otherside, a project from Yuga Labs with few public details. The trailer features the appropriate background song of “Break on Through (to the Other Side)” from The Doors.

The trailer opens with a BAYC Ape fishing by a stretch of water. He feels a tug on his rod, hoists his catch, and sees it’s a bottle labeled “DRINK ME.” The ape obliges, and finds himself abducted by a flying visitor. The video goes on to reference other NFT collections: Mutant Ape Yacht Club, Cool Cats, CryptoPunks, CrypToadz, Meebits, Nouns, and World of Women.

Now, considering what a week the BAYC franchise has had, this teaser is a curious addition to all the hype and speculation about where Yuga Labs plans to take BAYC next. At this juncture, there aren’t many details on what Otherside will be. But, taken together, this week’s various announcements suggest a 3D BAYC gaming experience powered by Animoca.

ApeCoin DAO has recruited prominent folks in the crypto community to serve on its board, including Reddit co-founder Alexis Ohanian and FTX’s Amy Wu. They’ll serve for six months, and then ApeCoin holders will vote for new members who serve one-year terms.

Also on Thursday, blockchain metaverse developer Animoca, famous for The Sandbox, tweeted that it was entering the BAYC universe: “Animoca Brands is excited to announce that we’ll be adopting @ApeCoin for the secret project we’ve been developing with @BoredApeYC

For some, airdropped coins amounted to upwards of $500,000 at the market’s peaks. If sold at the right time, it was a massive infusion of cash for the ape community, some of whom were already rich enough to afford million-dollar digital avatars, including Hollywood celebrities—but others of whom had bought their apes for a handful of ETH before the craze drove the yacht club’s floor prices skyward. (The cheapest NFT in the series is now worth 102 ETH, or $300,600 on OpenSea.)

Despite the volatility, in its infancy, ApeCoin is already the 48th largest cryptocurrency, according to CoinMarketCap, out of more than 12,000 cryptocurrencies in existence. According to the website, it boasts a total market capitalization of $1.3 billion. Whether its star continues to rise—or flares out—remains to be seen