Zuckerberg once again gets sucked into the trending list following the unveiling of Horizon Workrooms.

Mark Zuckerberg has once again occupied the hotspot on Twitter, as the Facebook CEO becomes the talk of the Twitter town yet again. The recent jolt to the trending list is following the announcement of Horizon Workrooms, an ambitious VR initiative by the company. The pandemic has sure closed the world, however, Facebook is exploring new opportunities to open up the world to possibilities. It is a well-known fact that the company has been tweaking around with VR. It has always made it a point to extend the possibilities of virtual reality beyond gaming. And perhaps, it might have hit the mark this time. Or perhaps not. 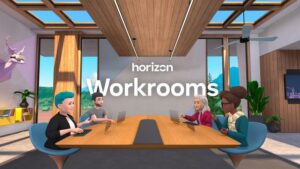 With the pandemic drawing people to their homes, completely transforming what normalcy was, humans have been looking for new ways to adapt to the unexpected curveball. Very soon, online meetings became the trend as we worked out a formula of life with work from home. But looks like the usual zoom meetings and google meets aren’t enough to fill the void left by the pandemic. Thus, Facebook has come forward adding fire to their already fiery ideas related to virtual reality.

Horizon Workrooms, the latest innovation brought forth by Facebook, is a virtual reality app that almost creates an illusion of working together in a room. Horizon Workrooms is will be a free app for the owners of Oculus 2 headsets. It would not be an exaggeration to call the workrooms as a quite ambitious effort on the part of the company to expand the scope of virtual reality beyond the domain of gaming. Although people have conflicted opinions about the workrooms, it cannot be denied that the app is a brillaint example of how to transform a calamity into an opportunity. Although workrooms is not yet a completion of the company’s goal since it still has to be refined to an extend, the possibility cannot be overruled of Horizon Workrooms being a preview of what is to come. In other words, it shows the extend to which the company has progressed on its idea of clubbing hardware abd software together.

Twitter as usual has taken up the case and soon enough, Mark Zuckerberg entered the trending list. While some users are quite intrigued by the latest addition, another group is not very impressed. Some are still holding old grudges. Let us take a look at the few responses and reactions on Twitter.

Mark Zuckerberg: I made an app that combines the worst parts of working from home and working in the office. YOU'RE WELCOME. https://t.co/WEgd9f707u

Looks like Zuckerberg has a lot of cleaning up to do.

THE WORLD: Do a better job reining in misinformation and extremism on Facebook.

Mark Zuckerberg: Here's more tech to have a meeting that should have been an email. https://t.co/irfN6gVUaj

Here's what Mark Zuckerberg is announcing in his interview on CBS: "A virtual reality app that lets you and your coworkers feel like you're sitting around a table in a conference room."https://t.co/NbdFuCfYxf

The metaverse dream is yet to be fulfilled. Does not mean it is not a possibility.

Mark Zuckerberg had a Facebook dilemma today about whether to report the bomber to the Capitol Police or serve him ads for detonators.

me: Fine, but this is what I'm wearing. https://t.co/eSRFnaSggr pic.twitter.com/Al1RqT4wkE

Tomorrow: Mark Zuckerberg makes 'special announcement about the future of Facebook' during interview on CBS (19 Aug)

I don’t trust Mark Zuckerberg. At all.

MARK ZUCKERBERG: What if we made Zoom…suck worse?

FACEBOOK LIEUTENANTS: Sir, it's not possible. It can't be done

ZUCK [grinning devilishly]: That's where you're wrong. Get me my space helmet

Facebook is the primary spreader of lies about covid, about masks, about vaccines, about democracy. As people die Sheryl Sandberg and Mark Zuckerberg are pocketing billions

mark zuckerberg: i invented virtual reality traffic. it will feel just like you’re stuck in your car for two hours a day, but right in the comfort of your own home
cbs: wow,