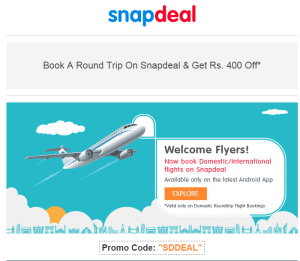 “Online services is an industry potentially worth USD 100 billion by 2020 and is poised to play a huge role in driving habit commerce in India. The introduction of services on Snapdeal nis a big leap forward in catering to nearly all the consumption needs of our customers,” Snapdeal co-founder Rohit Bansal said in a statement.

With this segment, Snapdeal becomes the first e-commerce marketplace to introduce services on its platform, the statement said. Snapdeal has launched the services through partnership with Zomato, Cleartrip, UrbanClap and redBus.

With the addition of home services, and extension of food ordering, bus/flight booking services, Snapdeal is looking to compete with companies like Paytm, which already had launched bus ticketing in partnership with RedBus back in 2012. Paytm had also launched movie ticketing by directly partnering with cinema houses like PVR, INOX and ticketing aggregator BookMyshow in March

Both, Paytm and Snapdeal primarly operate as eCommerce marketplaces, and as we had pointed out earlier, diversification is playing an increasingly important role in ecommerce as companies look to differentiate and offer more value added services. Additionally it lets ecommerce platforms explore other services as a means of income, since the margins on ecommerce are quite low. 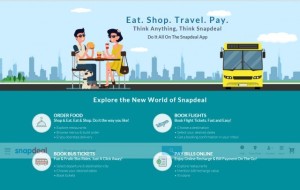 Bansal added, “We will continue to add leading service providers from other categories in our journey to offer a single point accessto the widest range of services. We are confident that the introduction of services on Snapdeal will bring us closer to our goal of 20 million daily transacting users by 2020.”

Earlier this year, Snapdeal had introduced recharges and bill payments and clocked more than 1 million transactions for those services within a month of launch, the e-tailer said. Image – Snapdeal