Facebook CEO Mark Zuckerberg has been keenly focused on expanding the reach of high-speed Internet around the world, bringing connectivity to previously unconnected places and, in the process, bringing new Facebook users into the fold.

Facebook is building a wireless Internet service that uses 60GHz WiGig technology to deliver “ubiquitous gigabit citywide coverage” in densely populated urban areas. Facebook said it is testing the technology at its headquarters in Menlo Park, California, and preparing a larger trial for San Jose.

“So far, we have demonstrated 1.05Gbps bidirectional (2.1 Gbps total throughput per distribution node) in P2P mode, up to 250 meters away,” the company said in an announcement yesterday. “This means up to 8.4Gbps of total traffic per installation point assuming 4 sectors, and we think this number can be as high as 12.8Gbps in the future.” Facebook also says it will make the technology “open and interoperable” in unlicensed spectrum, just like Wi-Fi.

“Given the limited range of the 60 GHz signal, these nodes are placed across a city at 200-250 meter intervals. The vast bandwidth and unique signal-absorbing nature of the band limits interference and simplifies network planning, while the unlicensed nature of the spectrum helps to further minimize costs. Designed to provide street level coverage, Terragraph implements a phase array antenna to retain the highly directional signal required for 60 GHz, but makes it steerable to communicate over a wide area.” 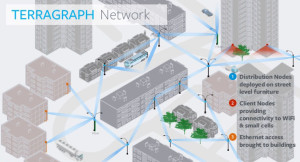 By Facebook’s estimation, 97 percent of the world lives less than 25 miles from a major city, and Facebook wants to use Terragraph and ARiES to address the internet needs of the many. Because obviously, more people connecting to the internet means more people can use Facebook. World domination, here it comes.