Japan’s Line is All Set to Make Its IPO Debut 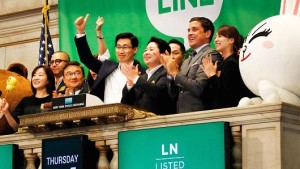 Japanese social networking firm Line made its debut on the New York Stock Exchange Thursday at $42 per share, in the largest technology initial public offering of 2016.

The company provides free voice calls and messaging, and gets the bulk of its revenue from games, digital stickers, and advertising. Line’s games have racked up a cumulative 628 million downloads, the company said. Line said it has 218 million monthly active users, with two-thirds in Japan, Taiwan, Thailand, and Indonesia.

Now Line is going public in a year where IPOs have been few and far between in the U.S. and tech offerings have been particularly scarce. The last tech company to brave the U.S. public markets was Twilio, another messaging service, which surged 91% in its first day of trading in June. Many companies have chosen to shun the public markets in favor of an infusion of cash from private investors.