15 years of Google Docs, and where the next 15 might take us 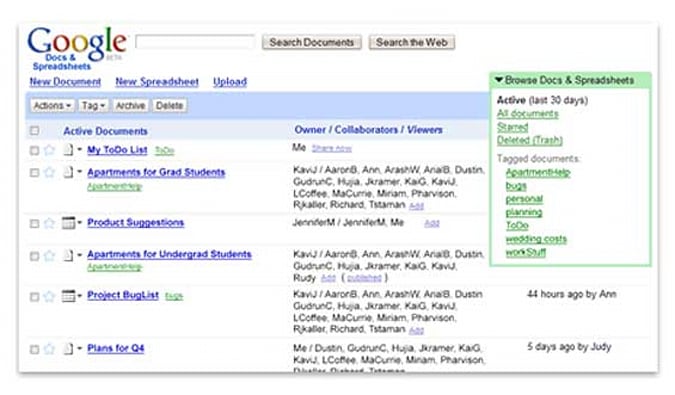 If you were writing a document 15 years ago, you were almost certainly using Microsoft Word. Word was the de-facto option for producing text, whether you were an author, an office worker, a student, a teacher… you get the idea. It was part of the company’s enormously successful Office suite.

However, Google officially debuted Google Docs and Spreadsheets in beta on October 11th, 2006. Docs and Sheets, like everything else Google, were cloud-based tools that also allowed you to communicate with others in real time. It’s easy to forget now, but this was a whole different way of working with documents back then.

In a 2013 interview with The Verge, Google Docs founder Sam Schillace described the project as a “hacked together experiment.” He had built Writely, a web-based text editing software, eight years before. In March of 2006, Google purchased the company. Only a month later, according to Schillace, 90 percent of the company was using Writely. “When we went to Google, Writely was quickly adopted internally,” he explained. Only seven months later, at the Office 2.0 Conference in San Francisco, Google formally launched Docs and Sheets. It was launched in beta for free, as were other Google products at the time.

Google Docs, on the other hand, has definitely progressed beyond its early stumbling blocks. Over the last decade or so, Google has paid a remarkable lot of attention to the product, iterating and enhancing it at a constant rate. That’s the mark of a product that Google appears to believe in. Android, Chrome (both the browser and the operating system), Drive, Photos, and, of course, Search and Gmail were all treated the same way.

The fact that Docs (like most of Google’s products) operates better online has become less of a hindrance as internet access has become more widespread. It took some getting accustomed to not having to worry about storing a document, but it’s now something we take for granted – if your browser crashes, whatever you were working on should still be waiting for you on the cloud.

In 2010, Microsoft made the initial moves toward providing Office applications online, which was perhaps the strongest endorsement of Google’s cloud-first strategy. However, for a long time, Google’s apps were better suited to the cloud. For example, until late 2013, you couldn’t have multiple individuals working on the same Office project, which was integrated into Google Docs from the start. Apple followed Google’s lead in 2013, introducing its iWork programs online and eventually allowing simultaneous collaboration.

In the next 15 years, collaborative and remote working will almost certainly become even more significant. That was obvious prior to COVID-19, and the subsequent 18 months have essentially demolished the assumption that everyone must go to work.

Another major step ahead will be content moving outside of tight platforms like Google Docs or Microsoft Office and into all of the other places where we operate.

To some extent, this has already occurred. Dropbox has long supported creating, sharing, and editing Microsoft Office documents directly within its app and website, and it later introduced Google Docs functionality as well. Slack, for example, has a slew of interfaces for Google Drive and Trello, though it’s unclear how extensively utilized or critical they are to a Slack workflow.

Google’s Smart Canvas (introduced at I/O this year) could be its own take on Fluid, a method to bring together different types of content and communication in one area. Smart Canvas, from what we’ve seen so far, offers a variety of “building blocks” that you can combine into a single canvas, such as a Meet call with a Google Doc for taking notes and a to-do list for assigning items to team members. It’s only available to paying Google Workspace clients right now, but it’s worth keeping an eye on to see how it develops.

No one can predict what further cultural workplace adjustments will occur in the next 15 years, such as those caused by COVID-19. And it is likely that these transitions will be the driving force behind the most substantial changes in work-related items.