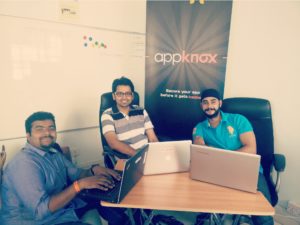 Appknox, a mobile security solution for enterprises and app developers, has raised $650,000 in pre-Series A round of funding led by SeedPlus — a new seed-stage VC fund backed by Jungle Ventures, Infocomm Investments, Accel Partners, and Ratan Tata’s RNT Associates.

The company, which analyses mobile app security on the cloud, has among its clients major ecommerce and payments companies such as Paytm, BigBasket, Myntra and Goibibo. “We also have four enterprise customers in Singapore apart from grocery app Redmart and content platform HOOQ,” said Prateek Panda, cofounder of Appknox. Appknox works on a subscription model and runs a list of 40 tests on mobile apps without the clients having to share source code with it.

The platform also carries out manual assessments of the app to check the data flow. “Given the explosive growth in mobile apps and smartphone users globally, security will be more important as the next billion smartphone users get online. Appknox is well poised to tap into this huge opportunity,” said Tiang Lim Foo, operating partner at SeedPlus who will also be joining the company board as director.

The fund is run by three operating partners who have recently joined Jungle Ventures—Michael Smith, who was CTO at streaming service HOOQ, former Spotify product manager Gabriel Lundberg and Tiang Lim Foo, who was previously with Evernote.

Appknox was founded by Harshit Agarwal, Subho Halder and Prateek Panda in 2014. Agarwal ran two startups–Coupov and Shopperson–in the past while Halder worked with Tata Consultancy Services Ltd and founded WWDoubleu Webdesigning. Panda was associated with GenCrowd and co-founded two startups–Achillean and TheTechPanda–previously.