Glue Would Stick Pedestrian To Self-Driving Car After Collision : Google 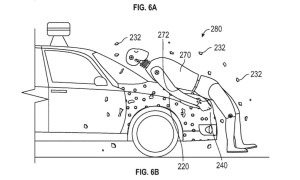 Here is another reason to look forward to Google’s autonomous vehicles (AVs) taking over the roads; they are actually thinking about pedestrian safety and control the damage caused in an accident.

In the recent Governors Highway Safety Association report on why pedestrians are getting killed at a higher rate when deaths of drivers is decreasing, they noted that “Pedestrians do not benefit from occupant-oriented vehicle crashworthiness improvements.” Google, on the other hand, is planning ahead for when their cars hit someone.

“The adhesive layer may be a very sticky material and operate in a manner similar to flypaper, or double-sided duct tape,” the patent said.

In its patent, Google acknowledged that robot cars will hit pedestrians — until the technology gets to the point that the vehicles can “avoid all accidents.” 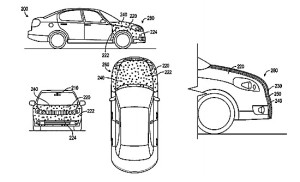 Today, when a car runs into a pedestrian, it often carries the person along until the driver brakes, throwing the victim from the vehicle, possibly leading to further injury as they hit the road or some other hard surface, or get hit by another car, the patent said. But that doesn’t have to happen.

Google isn’t the first to think about new ways to protect pedestrians from cars. Two major car companies have come up with systems of their own. Some European Jaguar models use small explosive charges to push the car’s hood up several inches in a collision with a person, softening the victim’s impact. In Volvo’s V40, a “pedestrian air bag” deploys along the base of the windshield, where struck pedestrians often suffer head injuries.