Unlike most 12-year-olds, Benjamin Ahmed is anything but typical. He enjoys swimming, taekwondo, and learning to code while he is not at school. Ahmed began programming at the age of five after witnessing his father, Imran, work as a web developer. He began by learning HTML and CSS, then progressed to JavaScript and other applications as his coding skills improved. Non-fungible tokens, or NFTs, and the smart contracts, or collections of code, that power them have recently piqued Ahmed’s interest.

Ahmed, who is located in London, tells CNBC Make It, “I first discovered about NFTs early this year.” NFTs caught my attention due to the ease of transferring ownership through the blockchain.”

Digital assets such as jpegs or video clips are represented by code stored in a decentralized ledger known as a blockchain. Like actual goods, each NFT may be purchased and sold, but thanks to the blockchain, the ownership, and validity of each can be tracked. 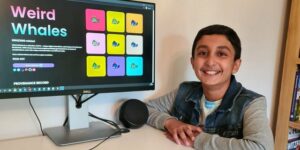 Ahmed was so taken with the technology that he decided to start his own NFT collection. Ahmed’s debut NFT collection, Minecraft Yee Haa, consists of 40 colorful, pixelized avatars that he “made after spending too many hours playing Minecraft,” according to Ahmed. He says he designed the artwork and coded each one himself.

The collection didn’t sell right away, but that was fine. Ahmed saw the endeavor as a learning opportunity rather than a “money grab,” and he wanted to keep creating. He started coding Weird Whales, his second NFT collection, in June, which includes 3,350 pixelated whales with unique peculiarities.

The effort combined a whale image with qualities similar to the legendary pixelated CryptoPunks, one of the first NFT collections to exist, to create a sort of meme. According to Ahmed, the initiative cost $300, the most of which was spent on gas fees, which are charged to blockchain validate each NFT. 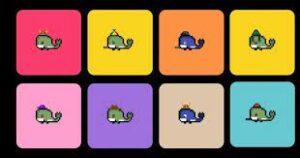 Ahmed learned how to code the collection along the road thanks to online tutorials and instructors he met through Discord communities, he adds. According to Ahmed’s father, Imran, one of the developers of another NFT project called Boring Bananas sent him a script to use as a template for creating Weird Whales.

The entire collection sold out nine hours after its July premiere, and Ahmed made over 80 ether in one day. With today’s prices, that figure is worth almost $255,000 because he kept his winnings in ether. Since Ahmed earns a 2.5 percent royalty on each secondary sale, he earned an additional 30 ether, worth nearly $95,000, from the resale market.

Ahmed says he plans to keep all of his ether and not convert it to fiat money. In the future, everyone may only need an ether address and a wallet instead of a bank account.

Ahmed is working on another NFT project and believes that a meme component will be present in many more successful NFT collections. “I believe memes have huge value in this sector, as many projects have some type of meme-related component to them,” Ahmed says, citing the recent popularity of meme-inspired Dogecoin as an example. “I believe memes play a significant role in this space.”However, he claims that having his IP, or intellectual property, will be crucial. Ahmed’s father has been in contact with lawyers to trademark Weird Whales and other planned projects in order to achieve this goal.

Also Read: Kobe Bryant’s youth sports foundation will receive all proceeds from the auction of a trove of unseen photos