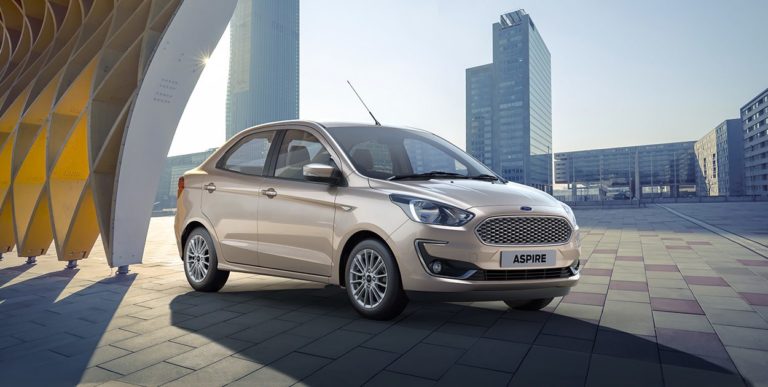 Ford has launched the facelifted version of its Figo based subcompact sedan Aspire in India today. Though the new model gets more equipment, fresh looks and a new set of engine, it is priced lower than the outgoing model. The prices start at ₹ 5.55 Lakh (ex-showroom, Delhi).

On the outside, Aspire gets some design cues from the recently launched Freestyle cross-hatch such as the front honey-comb grille finished in chrome. The sides of the front bumpers get big C-shaped chrome lining with the round fog lamps within them. At the rear, the taillamps are revised and so is the rear bumper. New multi-spoke alloys and updated ORVMs have also been added to the makeover list.

New Aspire’s cabin comes finished in the similar beige and black interior. The dashboard gets a new infotainment system similar to EcoSport and Freestyle, which comes with a 6.5-inch touchscreen display. Apart from Apple CarPlay and Android Auto, the new system also supports Ford’s in-car connectivity system SYNC3. Depending on the variant, you also get convenience features like auto climate control, illuminated USB sockets and a start-stop button.

The engine options for the new Aspire include two petrol and one diesel motors. Petrol variant with 5-speed manual gearbox gets a 1.2-litre three-cylinder engine used in the Freestyle that makes 95 bhp and 120 Nm of torque. To pair with the 6-speed torque converter automatic transmission, new Aspire borrows 1.5-litre three-cylinder engine from the big brother EcoSport. That engine makes 123 bhp of power and 150 Nm of torque.

The diesel variant of the compact sedan gets the same 1.5-litre four-cylinder TDCI engine that makes 99 bhp and develops 215 Nm of peak torque. The diesel engine only comes with one 5-speed manual gearbox option.

Ford is offering a bunch of safety features as standard that including dual airbags, rear parking sensors, ABS with EBD and seat-belt reminder, while the top-spec variant gets six airbags and an emergency assistance service. The automatic variant also gets hill-start assist, ESP and traction control as standard.

Surprisingly, Ford has priced the new Aspire lower than the outgoing version. The sub-four meter sedan competes with a long list of competitors including the Maruti Suzuki DZire, Hyundai Xcent, Honda Amaze and Volkswagen Ameo. The new Aspire is priced lower than all the mentioned competitor cars.