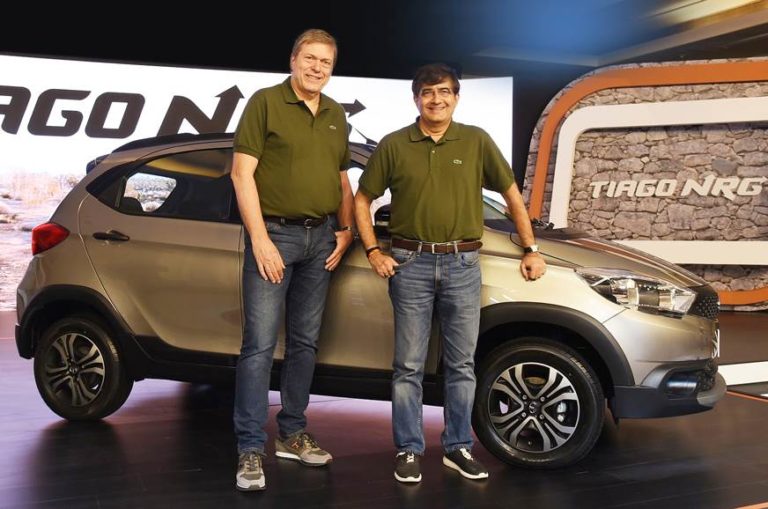 Ever since the initial launch, the success of Tiago has given Tata Motors a new beginning in the passenger car segment. Celebrating the success of the hatchback and trying to widen the customer reach, Tata Motors has launched a rugged version of the hatchback, Tiago NGR today. The cross-hatch is priced at ₹ 5.5 lakhs with a petrol engine and ₹ 6.32 lakhs (both ex-showroom, Delhi) for the one with the diesel engine.

The “Urban Toughroader” as Tata calls it, comes with heavy cosmetic upgrades from the standard Tiago. The Front grille and  ORVMs are blacked out to give it a bolder front fascia. The front and rear, both get new black bumpers additional faux brushed-aluminium scuff plates. The black cladding continues all over the sides of the car.

At the rear, the NRG has a roof mounted black spoiler and cladding at the middle of the tailgate to give it a unique character. The roof is also blacked out with additional roof rails. Tiago NRG sits on 14-inch alloys with newly shaped wheel arches. Ground clearance of the car is increased to 180mm which is about 10mm more than the standard Tiago.

The black treatment continues inside of the car too as the cabin is all finished in the black with orange inserts on the AC vents and contrast stitching for the upholstery. In addition to the features seen in the top spec Tiago, the NRG has a new 12.7-cm touchscreen infotainment system that comes with navigation, and AUX and USB connectivity.

Under the hood, Tiago NRG packs the same engines, the 85hp, a 1.2-litre petrol and a 70hp, 1.0-litre three-cylinder diesel unit. Unlike the standard version, the Tiago NRG is not available with automatic gearbox and will be only offered with a 5-speed manual.