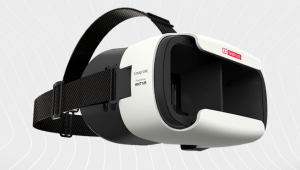 The OnePlus 2 was launched in virtual reality last year. The company will take the VR route once again when it launches its next-generation OnePlus 3, sometime in June. OnePlus on Monday announced the Loop VR Headset- a gradual evolution of its Google Cardboard-inspired VR that it brought about last year setting the stage “for the smartphone launch of the year, the OnePlus 3.”

The company has teamed up with VR specialists AntVR to build 30,000 specially made OnePlus Loop VR headsets, and it’s giving them all away on a first-come, first-served basis. This echoes a move made by the company last year when it gave away 30,000 Google Cardboard-style VR viewers to encourage fans to watch the launch event for the OnePlus 2 in virtual reality.

“We believe we, and the tech industry as a whole, have only scratched the surface of what can be done in VR, and there’s much more immersive experiences to be had,” said OnePlus cofounder Carl Pei. “Inspired by a certain fan video, we took to our imagination of where OnePlus would be decades from now, having moved our headquarters to space.”

Renders leaked by serial tipster, Evan Blass suggest that the OnePlus 3 could look strikingly similar to HTC One devices. Boasting of a full-metal unibody, the phone is said to include a fingerprint scanner, USB Type-C port and an alert slider, much like its predecessor phone.

Rumoured specs of the OnePlus 3 include: a 5.5-inch FullHD display (with some reports suggesting a 5-inch variant as well), OxygenOS based on Android 6.0.1 Marshmallow, Qualcomm Snapdragon 820 processor and 4GB/6GB RAM and 32GB/64GB memory variants. The phone is also said to have a 3,000mAh battery and Dash Charging, which is apparently OnePlus’ take on Qualcomm’s Quick Charge feature.