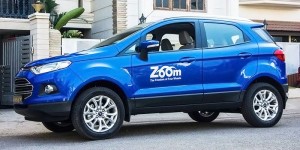 One of the largest and leading providers of online rental car services in India Zoomcar has raised another $25 million in a Series C round.

Ford Motor Company led this round of funding along with a couple other investors. This investment has bumped the company’s total equity investment to a whopping $46.5 million.

Zoomcar was launched by duo Greg Moran and David Back back in 2013, aimed at organizing India’s massively scattered car rental business via its desktop and mobile platform.

The startup Zoomcar, operates over 1,600 cars, claiming more than 2,100 rides a day and over 860,000 users. They offer different services such as those related to airport rides, train station pickups and general commuting.

Ford Smart Mobility functions as Ford’s venture capital arm for new technologies, connected to the company’s internal research arm Ford Mobility. Smart Mobility was formally announced only this past March with locations at the company’s corporate headquarters in Dearborn, Michigan along with an office in Palo Alto. It is the group’s third investment so far following a seed round in 3D mapping startup Civil Maps and co-leading a Series C investment in unicorn company Pivotal Software, also based in Palo Alto.

Zoomcar faces fierce competition from cab-aggregator Ola Cabs, who recently has also step foot into the car rental segment. The company is now offering rental services at two tariffs — Rs. 500 for 40 km/4 hrs for a hatchback vehicle as compared to Rs. 1,500 for 80 km/8 hrs. You can also avail a sedan car, and the driver will drop the vehicle at the pick-up location you choose.