A hamster has been trading cryptocurrencies since June

A hamster in Germany is rethinking Burton Malkiel’s view that a blindfolded monkey tossing darts at a stock ticker list in the newspaper may do just as well as a human investment specialist, as described in his book “A Random Walk Down Wall Street.” 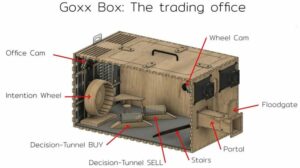 Mr. Goxx, the live-streamed hamster, has been trading cryptocurrencies on his own since June 12, and his results have been remarkable thus far. According to the @mrgoxx Twitter feed, which chronicles daily results as well as every move made by the hamster, the portfolio was up about 24% as of Friday. Over the same time, Mr. Goxx outperforms bitcoin and the S&P 500.

The “Goxx Box,” a crypto-rigged office attached to Mr. Goxx’s larger residence, allows the hamster to undertake various workouts that subsequently execute precise cryptocurrency trades, was developed by Mr. Goxx’s carer. The hamster is free to come into its office whenever it wishes to do business.

To begin, Goxx uses the “intention wheel” to determine which of the about 30 cryptocurrencies to trade. After selecting a cryptocurrency, the hamster travels through one of two “decision tunnels” that initiate a purchase or sell trade in that coin. Tron, Ripple’s XRP, Cardano’s ADA, and ether are among the top cryptocurrencies currently held by the hamster.

According to Protos, Goxx’s portfolio was funded with the euro equivalent of $390. Mr. Goxx’s unnamed caretaker and business partner told Protos that the hamster’s trades are set to 20 euro increments by default.

“If Mr. Goxx’s channel continues to gain popularity, there are plans to offer him greater control and allow him to choose his buy amount,” the business partner informed Protos.

As of Friday afternoon, Mr. Goxx had made a profit of 77 euros. According to performance data gathered by Protos, its portfolio achieved a high of about $580 in mid-September, when its performance was up nearly 50% in less than three months. However, the current crypto sell-off has taken a bite out of the hamster’s gains.

But a profit is a profit, and Mr. Goxx is probably aware of this. “Mr. Goxx is relieved to see that some of his investments are finally paying off,” a business associate told Protos. 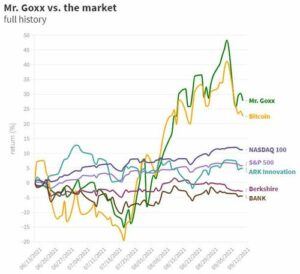 If you find the article Information then do share it with your friends and family!