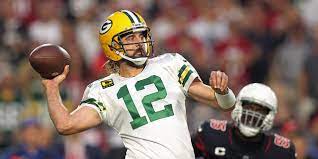 Aaron Rodgers to Take Part of His Salary in Bitcoin

Packers quarterback Aaron Rodgers began his address with that popular rallying cry in a video announcement shared on his Twitter page on Monday, before revealing he has teamed up with Cash App to have a portion of his salary paid to him in Bitcoin, as well as giving away $1 million in Bitcoin to his fans.

Rodgers made the news while still dressed in his John Wick-inspired Halloween costume, for which he had grown his hair out for the past year. Rodgers isn’t the first NFL athlete to show his support for the trendy cryptocurrency.

Former Chiefs tight end Sean Culkin declared his decision to convert his full 2021 salary to Bitcoin before being dismissed in May, while offensive tackle Russell Okung utilized half of his contract to acquire Bitcoin in 2020.

Rodgers’ current contract pays him $33.5 million per year on average, and it’s unclear how much of that will be paid in Bitcoin. With 1,894 passing yards, 17 touchdowns, and three interceptions, the reigning league MVP has led Green Bay to a 7-1 start in 2021.

The 27-year-old signed a reserve/future contract with the Chiefs in February, with a base salary of $920,000 if he makes the squad.

Culkin tweeted, “I firmly believe Bitcoin is the future of money, and I wanted to prove that I have true skin in the game—not simply trying to make a quick buck.” “I’m going to convert my entire NFL paycheck for 2021 to Bitcoin.”