Bitcoin’s record-high price, according to tech entrepreneur Peter Thiel, is a symptom of investors’ inflation fears. According to Bloomberg, he stated, “What it is telling us is that we are having a crisis moment”.Bitcoin supporters argue that the unit is an inflation hedge, but many investors are skeptical. 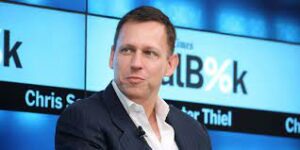 Bitcoin’s sky-high price, according to tech billionaire Peter Thiel, is an indication that the economy is in a “crisis moment” due to rising inflation, which has reached a 13-year high in the United States.

According to Bloomberg, he stated at the National Conservatism Conference on Sunday, “You know, $60,000 Bitcoin, I’m not convinced that one should actively acquire. However, it is indicating that we are in the midst of a crisis.”

The US Federal Reserve, according to Thiel, believed it could undertake massive stimulus without rising inflation, and it isn’t taking the issue seriously enough. He expressed regret for not purchasing more bitcoin and stated that he believes inflation is here to stay.

Bitcoin proponents have long claimed that the cryptocurrency is “digital gold,” a scarce asset that will maintain its value even in times of heavy inflation.

In October, Bitcoin hit a new high of around $66,000, owing to investor concerns over rapid increases in the rate of price rises across the global economy. In September, US consumer price index inflation was at a 13-year high of 5.4 percent year-over-year, as the economic recovery from the coronavirus pushed up food and energy prices.

In late October, JPMorgan said it appeared that investors were buying into the digital gold argument. “We believe the main reason for the present uptick is the view of bitcoin as a superior inflation hedge than gold,” the bank’s analysts wrote in a note.

Many institutional investors, on the other hand, are skeptical of the inflation hedging argument. They argue that Bitcoin’s extreme volatility makes it far too risky to include in one’s portfolio.

Also read: Crypto​.com is on top in the Google Play Store in the US