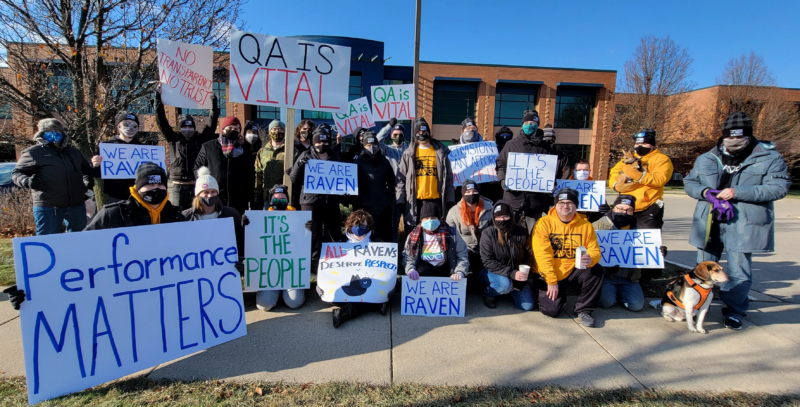 A Better ABK Workers Alliance, a group of Activision Blizzard employees, has announced that its members will go on strike indefinitely “until demands are met and worker representation is finally given a position within the company.”

“We encourage our peers in the Game Industry to stand with us in creating lasting change,” the worker group tweeted Thursday morning.

Today, the ABK Worker's Alliance announces the initiation of its strike. We encourage our peers in the Game Industry to stand with us in creating lasting change. For those who wish to join in solidarity, please consider donating to our Strike Fund.https://t.co/IauGyxuLYG

A Better ABK has already assisted in the organisation of two employee walkouts to protest extensive allegations of harassment and gender discrimination within the corporation (which have led to multiple lawsuits and executive departures).

However, those walkouts were intended to convey a statement that employees were dissatisfied with the company’s management direction in general and with CEO Bobby Kotick’s leadership in particular.

The walkout this week is a longer-term work stoppage in response to the firing of 12 quality assurance contractors at Raven Software late last week. According to the Washington Post, at least 200 employees from throughout the corporation began walking out on Monday, including “all of Treyarch’s central QA.”

The strikers stated that they would not return unless “every member of the QA team, including those terminated on Friday, is offered full-time positions,” as the organisation phrased it.

According to the Washington Post, Activision Blizzard management notified striking employees that they would only be paid until Wednesday. So employee organiser Jessica Gonzalez, who announced her departure from the company last month, has established an ABK Strike Fund to compensate strikers for lost wages and “assist in the potential relocation of Raven Software workers who were forced to relocate without financial assistance at Activision Blizzard’s insistence.”

Gonzalez claims that Activision Blizzard management has “continually abused, union-busted, and remained apathetic to the wishes of workers” in a GoFundMe campaign for the Strike Fund. Gonzalez further singles out the board of directors of Activision Blizzard for “appearing to remain confident in Kotick’s unfit and unproductive leadership.”

A Better ABK is also aggressively seeking to build a formal labour union by issuing union authorization cards to employees, in addition to the strike. If a majority of employees sign the cards, Activision Blizzard may choose to recognise the newly established union freely or trigger a formal NLRB vote on union representation for all employees.

A Better ABK has teamed with the Communication Workers of America, which represents over 700,000 employees across a variety of industries, to assist with the organising drive and strike money (including Ars Technica employees through the NewsGuild of New York).

The CWA assisted A Better ABK in filing an unfair labour practises complaint against the company in September, alleging that the corporation used “coercive techniques to prevent its employees from exercising their rights to stand together and demand a more equitable, sustainable, and diverse workplace.” “It is their right as workers to unite for a workplace free of abuse, discrimination, and sexual harassment, and federal labour law protects this right.”

The Campaign to Organize Digital Employees was formed last year by the CWA and Game Workers Unite. That was the most comprehensive push yet to secure union representation for American game creators, who have had more than their fair share of job insecurity and “crunch time,” among other issues.

Because of this, A Better ABK’s work stoppage and now-public fight for union recognition could be a watershed moment in the sector.

“There is still a long way to go,” Blizzard Senior UI Engineer and A Better ABK organiser Valentine Powell wrote on Twitter, “but we want to support our coworkers across ABK to finally have a real voice in how our companies are run because for the past months and years, we have seen our leadership continue to ignore the needs of its employees.”