Adani to acquire 49% stake in Quintillion Business Media On March 1, 2022, Adani Enterprises signed a Memorandum of Understanding with Quint, announcing its entry into media business. 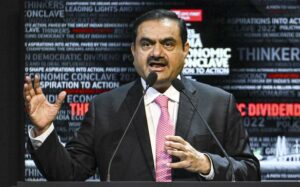 This week, a regulatory filing revealed that AMG Media Networks is set to acquire a stake of 49% in Quintillion Business Media Ltd. This unit of billionaire businessman Gautam Adani’s empire Adani Enterprises, is picking a stake in Raghav Bahl-curated digital business news outlet for an undisclosed amount. Previously, in March 2022, Adani Enterprises made the announcement of it stepping into the media business through the acquisition of an unspecified minority stake in this news platform.

The Adani enterprises unit has signed a Shareholders’ Agreement with the Quintillion Media (QML) and (QMBL). Along with it, a share purchase agreement with QML, QMBL and Quint Digital Media (QDML)  in relation with its proposed acquisition of the 49% stake in QBML. This aspect was disclosed by a regulatory filing from the Adani Enterprises on Friday, May 13.

Adani Enterprises stated how the “SHA and SPA” recorded the agreement terms with respect to the acquisition of the 49% equity shares of QBML by Adani Enterprise’s AMG Media. Along with the terms, they recorded the ‘inter se rights and obligations and other matters’ connected to the deal.

“We would like to inform you that pursuant to the Memorandum of Understanding dated March 1, 2022, the Company and its material subsidiaries Quintillion Media Limited and Quintillion Business Media Ltd have signed definite agreements with AMG Media Networks Limited….” it said.

Referring to the ‘Memorandum of Understanding dated March 1, 2022,’ the filing stated how the company, and its subsidiaries QML and QBL had signed ‘definite agreements’ with Adani Enterprises’ subsidiary AMG Media Networks Ltd. In conclusion, it mentioned how the divestment with Quintillion Business Media Ltd. is of the 49% stake.

On March 1, 2022, Adani Enterprises had signed a Memorandum of Understanding with Quint, announcing to venture into the media business. Specifically, this would be through the acquisition of an unspecified minority stake in Quintillion Business Media Ltd.

It had specified the ‘proposed transaction with the Adani Group’ is only for Quintillion Business Media, a digital news platform. Additionally, it stated how it is not in connection to any other digital media or media tech subsidiary which Quint Digital owns such as ‘Youthkiawaaz,’ Quintype Technologies, The Quint and the new minute.

Clearly, Gautam Adani’s port-to-energy conglomerate has been keen to enter the media industry for the last few couple of months. Last year, in September, it went on to hire veteran journalist Sanjay Pugalia. They wanted him to lead their media company, Adani Media Ventures.