Afghan Girls are learning, code ‘Underground’ to bypass Taliban Curbs Her school shut down after Taliban took control, but that didn't stop from learning.

Being locked at home in Herat city of Afghanistan, Zainab Muhammadi is one of those hundreds of girls who want to learn, who want to study. She recalls and talked about her hanging out with her friends about her coding classes.

But she is login in every day to her secret online classes.

On a video call with Thomson Reuters Foundation, she said that ” There are many threats and dangers to girls like me if Taliban get to know about their studies. They will punish us, even stone me to the death.” She also requested to use her false name to protect her Identity.

Schools are shut down since the Taliban took control of the country in August. But that did not stop some girls like Mohammadi from their studies and learning.

She said, “I did not lose my hope and my aspirations. I am determined to continue my studies.”

Feresteh Forough, CEO and founder of Code to Inspire (CTI) in Afghanistan is the first female coding company. They created an encrypted virtual classroom, uploaded courses online. They also gave laptops and Internet packages to hundreds of students. Muhammadi is one of those hundreds of girls and women who are willing to learn and continue their learning. Some are online and some are in going hidden classrooms.

“You can be locked at home and explore the virtual world without any hesitation, fear and without worrying about your geographical boundaries. And that is the beauty of Technology” Feresteh said.

A month back, the Taliban government stated that only older boys could resume their schools along with all primary-age children. But they said no girls between roughly 12 to 18 will go anywhere and stay at home until further notice to permit their return. 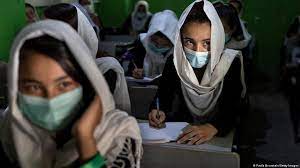 When the Taliban was removed in 2001 from Afghanistan, schools attendance increased rapidly. According to UNICEF, more than 3.6 million girls enrolled by 2018. The number of girls going to universities, which is tens of thousands now, was also jumped. Nearly 6 percent of women were accessing education in 2020.

The Taliban, who barred girls from education in their last rule about 20 years ago, now promised that it will allow girls to go to schools and educational institutions.

A senior from United Nations Officials met with the Taliban earlier this month said that the government is working on the framework, which would be published by the end of the year.