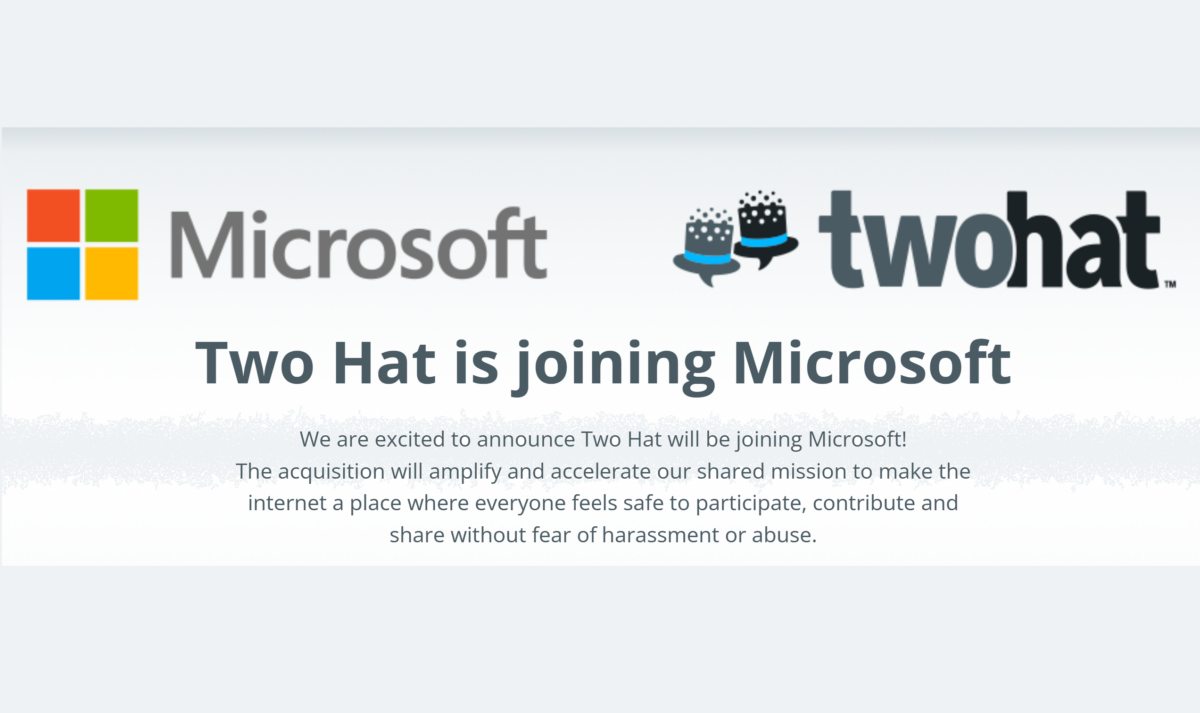 Microsoft, the technology giant, the Windows-maker and the leading player in the cloud computing market is reaching the peaks of its height once again. The company is getting back at its feet and focusing hard on snatching its position as the most valuable company in the world.

According to recent reports, Microsoft has acquired an Artificial Intelligence-powered content moderator company, Two Hat which is said to be the world’s leading content moderation platform for organizations ranging from start-ups to enterprises.

The acquisition is said to arrive after Microsoft collaborated with Two Hat on making global communities in MSN, Xbox and Minecraft, and making the overall experience safe for users. The main aim of this collaboration is to make the internet a safer space for users to participate, contribute and share their content without the fear of abuse or public harassment.

Microsoft and Two Hat share this vision and that is why the two companies have started to work together under Microsoft’s brand name.

Two Hat was founded back in 2012 by Chris Priebe, a developer who was previously working as a senior application security specialist at Disney, according to Gamespot. The company’s goal is to ensure that players do not stop playing games due to negative social interactions and this is where the content moderation part comes in. Microsoft has previously worked with Two Hat to know how the company works and considering this shared vision, today the Windows-maker has successfully acquired the company.

However, neither of the companies have disclosed the numbers on the deal but we do know that Microsoft has successfully acquired Two Hat without any complications unlike its previous two failed acquisition attempts- Discord and TikTok.

TikTok was a major deal for Microsoft but unfortunately, the companies could not settle for an agreement, then later, the Biden administration officially stopped all bidding on TikTok and blocked the company from being sold.

For Microsoft, protecting its users’ safety is the utmost priority in order to gain their trust once again. After facing major cyberattacks like the SolarWind attack, the company has gotten conscious of protecting its data.