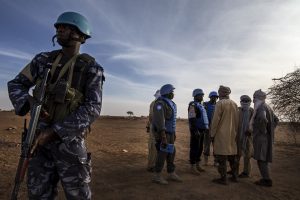 Artificial intelligence has been deployed in a multitude of fields, and the results have always been successful or around the neighborhood of success. The United Nations have now added artificial intelligence to its work equation, by using an AI tool that was originally designed for market supply to survey people in war zones, letting their voices be heard amidst the deafening noise of war.

In theory, the major goal of the United Nations is to maintain peace and harmony in the world. It carries out this function in a variety of ways, whether it be by resolving and mediating conflicts or by assigning peacekeeping troops to protect and shield the civilians. However, the clarity of theory tends to blur a little when it touches the line of reality. The UN has often received intense criticism and scorn for being completely ineffective and unaccountable to the people, particularly the local civilians it claims to protect and shelter.

In order to solve this problem, the UN conducts surveys, however, the inherent slowness and high expenses often reduce the efficiency and effectiveness of these surveys. And since the surveys consume a lot of time, the input attained often becomes outdated and devoid of use. Especially when it comes to critical areas like war zones the right information at the right time is of utmost importance.

To work towards filling these blank spots and limitations, the Innovation Cell was launched in 2020. The prime objective of the cell is to innovate and identify technologies that will enhance the peacekeeping processes and boost their effectiveness. Innovative Cell, recently connected with Remesh, which is a software company based in New York.

Remesh used artificial intelligence to curate a platform that is capable of facilitating live conversations with more than 1000 people simultaneously. The AI helps in studying and analyzing these responses, thereby facilitating the creation of follow-up questions. Although designed for market research, the UN found the tool useful for peacekeeping missions, helping them to survey people in conflict zones. The only pre-requisite for participation in the sessions conducted by the platform is a web link. Thus, the citizens can conveniently express their views and opinions or problems and elicit responses from leaders and authorities in real-time.

Though the tool sounds to be quite useful and innovative, there is an inherent limitation. Because we are talking about areas ravaged by wars and conflicts and not everyone in such areas can have access to the internet. And to add fuel to the fire, it is those people in areas with no internet access that are most adversely affected and in immediate need of help and aid. This is the advantage that telephonic surveys have over internet surveys.

However, it cannot be denied, that the AI tool is one way through which the voices of those silenced for long can be heard with a certain level of clarity.