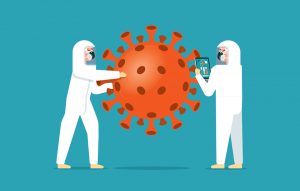 An early detection system powered by artificial intelligence has predicted that at least for now, South Africa is at low risk of a third wave of Covid-19 infections.

The artificial intelligence system was developed by the University of the Witwatersrand, in collaboration with iThemba LABS, the Gauteng Government, and York University in Canada.

Even after a busy and engaging Easter holiday period, the algorithm predicts low-risk levels of infection across all provinces.

How Does It Work

Based on the historical data retained from the past infection history of the country, the system predicts future daily confirmed cases. This will be of substantial help in bracing up for a probable calamity and being prepared to fight the same.

“The current data shows us the risk for a third infection wave of Covid-19 is small across most of the provinces of South Africa, but we still remain highly vulnerable.”

The system makes predictions based on the infection rates, mortality rates, and the stringency of non-pharmaceutical interventions like travel bans. Following this, a comparison is made by the system between current data and previous waves of the disease. Then, a prediction is made concerning a potential new wave of infection.

Though absolute accuracy cannot be expected from the algorithm-based predictions, Professor Mellado expresses confidence in the good forecast presented by the model over a two-week period. Although the artificial intelligence system is capable of making predictions over longer periods, there will be a considerable decrease in accuracy.

The data comes to the rescue especially when predicting relative social behavior is quite difficult. By keeping track of data over a particular period and analyzing it, it becomes easier to make note of subtle differences in figures that imply a possible change. The abundance of information provided by the data can prove to be a significant resource in the fight against the pandemic if utilized in the right and effective manner.

When it comes to fighting a disease, early diagnosis can become the line separating life and death. The same goes for the pandemic as well. Early alerts and warnings facilitated by these predictions can save hundreds of lives and become an effective tool in the fight against the pandemic.