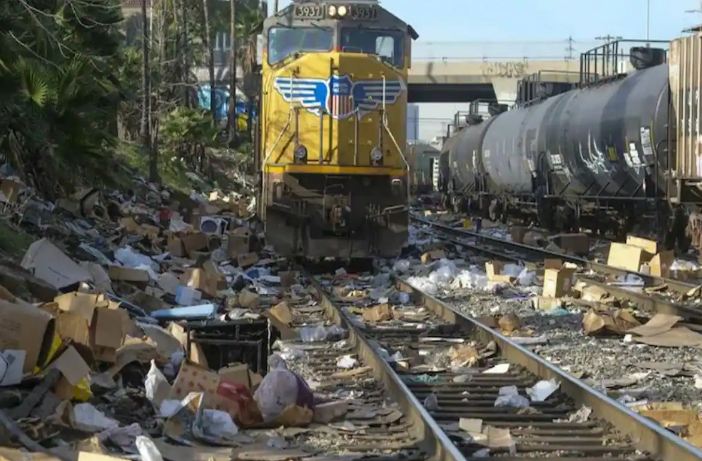 Since January 1, more than 90 containers have been vandalized every day. Since the growth in Christmas shopping in late December 2021, the number of instances has increased. Every day, the number of theft cases in the United States increases.

According to an AFP story, robbers break into dozens of freight carriages on Los Angeles’ rails every day. They take advantage of railway pauses to pilfer online-purchased parcels. In exchange, they leave tens of thousands of empty boxes and partially opened parcels that will never reach their intended recipients.

Trains looted in the US

The crimes have grown in recent months, according to the research, and major US mail order and courier firms such as Amazon, Target, UPS, and FedEx have been attacked. Since January 1, more than 90 containers have been vandalized every day. Since the growth in Christmas shopping in late December 2021, the number of instances has increased.

Keep hearing of train burglaries in LA on the scanner so went to #LincolnHeights to see it all. And… there’s looted packages as far as the eye can see. Amazon packages, @UPS boxes, unused Covid tests, fishing lures, epi pens. Cargo containers left busted open on trains. @CBSLA pic.twitter.com/JvNF4UVy2K

Since December 2020, train operators in Los Angeles County have witnessed a 160 percent increase. According to the research, the increase in instances was 356 percent in October 2021 alone.

The burglars wait till the lengthy freight trains are stopped on the tracks before climbing onto the freight containers and breaking the locks with bolt cutters.

According to the allegation, they then help themselves to parcels, discarding any items that are difficult to carry or resell, or are too inexpensive, such as Covid-19 test kits, furniture, or pharmaceuticals. Another concerning pattern has emerged as a result of this. The number of armed robberies and attacks against Union Pacific personnel has also increased.

There has been a direct spike when it comes to theft in Los Angeles. Despite the major theft has been mostly concentrated to major e-commerce platforms like Amazon through which direct shipments have been stolen.