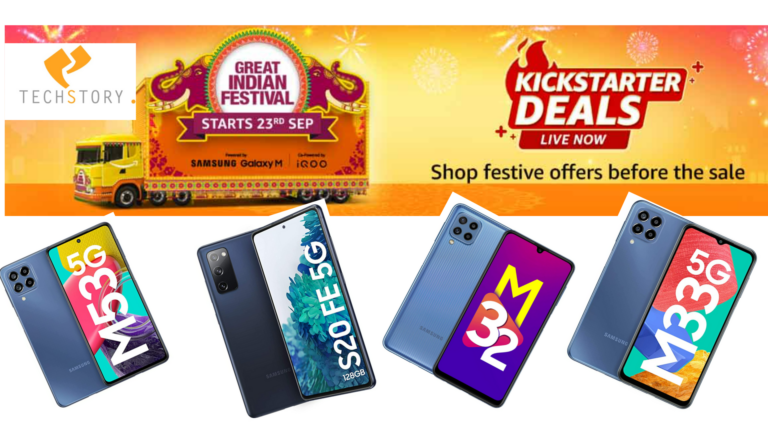 It’s Sale time and Amazon India has already been working towards bringing new offers and discounts on products including appliances, electronics, gadgets as well as fashion too. Already, Amazon has confirmed to all of us that we will get to see Amazon hosting the new “Great India Festival Sale” officially on the 23rd of September this year.

Adding more details to this, before the commencement of the sale, we have Amazon India confirming the new “Kickstarter Deals” they have reportedly started. For this sale, we will get to see a glimpse of products that will go again discounts for the actual sale day.

If you are looking for a smartphone upgrade specifically you want to upgrade to a new Galaxy smartphone, then you are in the right place, as here we will be covering details about the discounts you will get to see for different smartphones for this sale.

As we mentioned, we will get to see Amazon India bring Kickstarter deals before the official sale day. However, here we are covering details on Samsung Galaxy smartphone discounts and more:

Here we have Amazon as well as Flipkart providing discounts on Samsung Galaxy devices, we have already covered an article about Samsung smartphone discounts on Flipkart, do checkout the article here:

Samsung Galaxy S20 FE 5G smartphone has been among the popular budget premium smartphones and we have this smartphone coming up with the premium specification. Although, this smartphone was launched way back but still for the pricing it provides a great overall feature.

This smartphone comes with Qualcomm Snapdragon 865 5G chipset which is coupled with a faster 8GB of RAM and faster internal storage of 128GB.

On the front side, we have a 6.5-inch Super AMOLED screen with the support for a faster 120Hz refresh rate, and also this phone comes with a bigger 4,500 battery and also gets premium IP68 water and dust resistance certification.

If you are looking for an M series smartphone coming with an AMOLED screen and non-Exynos processor then you can get this Samsung Galaxy M32 smartphone for a great discount.

Here this phone comes with a power-packed 5NM chipset which is coupled with a faster 8GB of RAM which can be expanded to 16GB too.

On the display side, we have this smartphone featuring a 120Hz faster refresh rate and features the latest 50MP camera sensor on the rear.

Samsung Galaxy M53 5G is the next variant launched as the successor to the Galaxy M52 5G smartphone. Here this phone comes with an even bigger 108MP sensor on the rear and features a bigger 6.7-inch Super AMOLED screen with the support for FHD+ resolution and 120Hz faster refresh rate as well.

Inside, you will also get a faster MediaTek Dimensity 900 chipset which is based on the 6NM process. The smartphone also features a bigger 5,000mAh battery which again gets the support for faster 25W wired charging too.