Amazon permanently lifts ban on mobile phones in warehouses The retail agent had previously imposed the rule which was not well received by the workers. 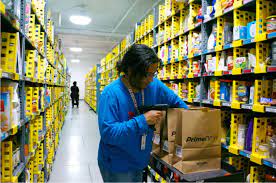 According to recent reports, Amazon is all set to allow its warehouse workers to keep their mobile phones with them at the time of work. This indicates them abandoning plans of resuming a ban that was temporarily removed during the Covid-19 pandemic. The retail company disclosed the decision to the employees in an email which mentioned how the company understood their need to keep their devices inside the facilities. They specified how they realised from the past two years that they could ‘safely’ take this step. As a result, they said, they were making the ‘temporary phone policy permanent,’ all over the world, at every ‘operations facilities.’

The retail giant, based in Seattle, initially considered the resumption of the ban towards the end of 2021. The consideration infuriated the workers who stated that they required the phones in order stay in touch with their families at the time of the pandemic. Their demand was further reinforced by the occurrence of the December tornado that killed six workers at the Amazon warehouse in Edwardsville, Illinois. Following this, the workers further emphasised the need to have their mobile phones in order to access real-time information at the time of emergencies.

“Therefore, we are making the temporary phone policy permanent, worldwide, in all of our operations facilities.”

The retail agent had maintained the prohibition for employees to have their phones inside the facilities for years. They required the employees to leave them in their vehicles or lockers provided near break rooms. After its temporary relaxation during the pandemic, the retail giant announced its possible reimposition. As the warehouse workers complained about it, the company said that cell phones were allowed ‘until further notice.’

Amazon’s step to prohibit mobile phones does not come as a surprise for employers often discourage the use of devices during work. These devices could be a risk to safety, specifically in industrial operations in case workers are distracted. Moreover, some organisations also fear that employees could possibly use smartphone cameras to leak internal information. However, employees in any sector consider these devices essential to their needs, especially in cases of emergencies.

The retail giant’s current stance on allowing phones is a result of the unprecedented labour unrest faced by them. This month, workers at one of the Amazon warehouses in Staten Island voted to form the first workers’ union. Moreover, another vote is scheduled to determine if 1,500 workers in a neighbouring facility would get representation from the same union.