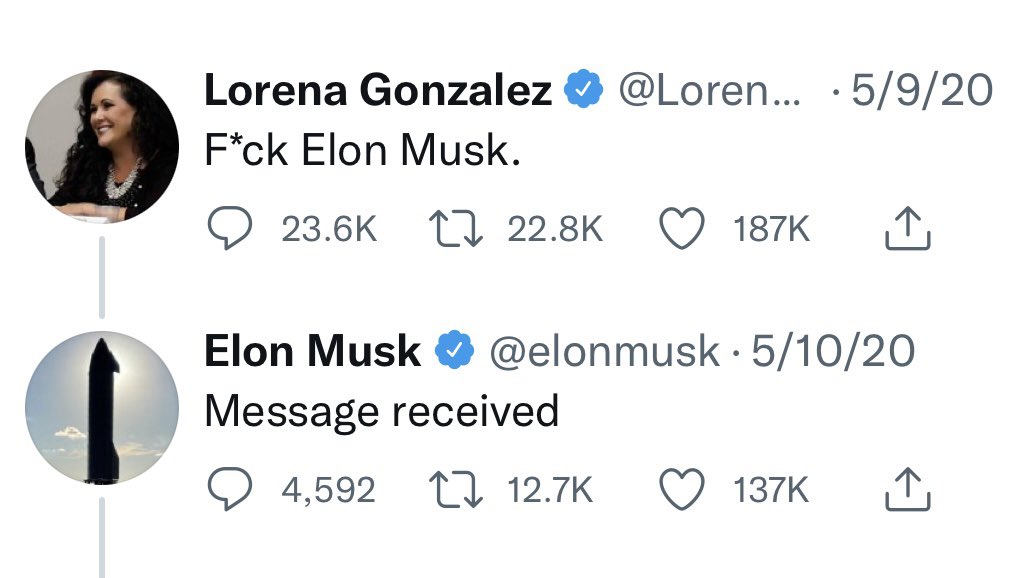 Elon Musk, the name that can move share markets, business profits and the industry is being taken for granted on Twitter. Well, not exactly for granted but someone said something very mean to him, and his silence is being taken as weakness. Is that a wise thing to do? We should ask the California Assemblywomen who tweeted, “F*ck Elon Musk*.

Yes, an elected official from California, Lorena Gonzalez tweeted back in May, “F*ck Elon Musk* to which Musk had a very calm response- “Message received”. The conversation ended then and there but Twitterati won’t leave this behind, coming from an elected official, this kind of behaviour is absolutely unacceptable but then it happened and Gonzalez apparently faced the music on Twitter for her tweet.

Now, Elon Musk has recently announced to relocate his Tesla HQ from California to Texas following several reasons including his personal relocation to Texas a few months back. The announcement was made during Tesla’s 2021 Annual Shareholders Meeting. The decision is apparently a wise step and a logical move for Tesla’s scaling business.

Musk explained how this relocation is beneficial for the company and its employees. The cost of living in California is way more than what it is in Texas, so the company employees will be able to better afford rent and other costs of daily needs.

Tesla is building a large electric vehicle plant- a Texas Giga Factory which is scheduled to begin operations this year. The plant will be set up in Austin, Texas and this is a huge reason for Musk to relocate personally and move Tesla HQ out from California. Other than this, SpaceX is scheduled to begin operations in Texas, Musk’s tunnelling company- The Boring Company is also actively involved in Texas for its projects. However, all of these reasons seem logical for Tesla to move its headquarters from California to Texas.

Other than this, as mentioned in a report by Tesmanian, back in 2020, when the COVID-19 situation was intense and businesses were all drowning, the California government continued to block a clear path for Elon Musk and Tesla to begin its operations of Tesla factory, despite the fact that almost all other automakers in the United States had begun working in factories. Musk tried to resist the government’s force by implying logical reasoning as he was trying to start the factory and provide employment to tens of thousands of employees. What was the California government’s reaction? Well, not impressive at all. Elected officials from the government were taking things personal with Musk, not choosing appropriate words in expressing their opinion about the Tesla factory and Musk in particular. The feud turned to personal insults and the use of obscene language which is absolutely not acceptable when coming from an elected official of the government.

This is what I am talking about- “F*ck Elon Musk*, is this something that we can expect from our government when someone is trying to provide employment to tens of thousands of people in the trying times of the COVID-19 pandemic? Someone must speak with California Assemblywoman Lorena S. Gonzalez, an active politician for the Golden State, who posted this obscene comment about Elon Musk publicly on Twitter.

The intelligence of an elected official in 4 photos: pic.twitter.com/ItdCSGiSww

Ever wondered why one by one, multi-billion-dollar businesses who have brought in chunks of money to the state treasury every year, are slowly moving out of the State? Well, this is the reason. There is a huge problem in the apparatus of the state that needs immediate fixing. If someone, let alone a government official, can comment so personally using such obscene language, then maybe it is right for businesses to leave California for some other state.

Elon Musk being the dedicated entrepreneur that he is, decided not to engage in an argument with someone like Lorena Gonzalez. Instead, on her Tweet about Musk, the only response she got was, “Message Received”.

The story doesn’t end here. Elon Musk decided to move Tesla HQ out from California to Texas for the logical reasons that Musk gave during the Shareholders meeting, but Lorena Gonzalez took it to a whole different level.

She responds to a tweet regarding Tesla’s relocation to Texas saying, “You mean Elon Musk is such a snowflake he moved from California because I said a censored bad word about him? Wow, isn’t that weak.”

🤣 you mean Elon Musk is such a snowflake he moved from California because I said a censored bad word about him? Wow, isn’t that weak.

Now, to all those people who could make sense out of this tweet from the highly qualified and educated elected government official, open your minds and think for a second. In my opinion, Gonzalez is only trying to attract some controversy, shooting shots at Musk. She knows for a fact that someone as powerful and popular as Musk would definitely bring her to the news headlines and that is actually happening. Is Lorena Gonzalez trying to catch publicity? Is this a publicity stunt? Well, bad publicity is also good publicity, but for a government official, things like this should be taken into consideration.

Do we want someone like Gonzalez to take over as President someday? F*ck Elon Musk, F*ck this, F*ck that, F*ck everything, kind of a person? Is this the leadership that we vote for every year?

Do let us know what you think.