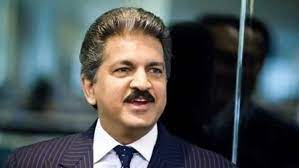 Anand Mahindra, Chairman of Mahindra Group, announced on Friday that the market capitalization of its realty firm Mahindra Lifespace had surpassed USD 1 billion, proving skeptics wrong that the company could not survive without transacting in black money. According to him, the achievement validated the Group’s debut in the real estate market. Mahindra Lifespace Developers Ltd is the Mahindra Group’s real estate arm. It is publicly traded on stock exchanges.

“When I first entered the real estate sector in the late 1980s through Mahindra Ugine, I was told that we would not be able to survive unless we transacted in black money.”
“But that is precisely why I felt we needed to enter the sector and prove the skeptics wrong,” he tweeted.

“My thanks go to Arun Nanda, who headed the sector, and the @life spaces team, led by Arvind, for getting us to this milestone and confirming our entrance,” Mahindra stated. Arun Nanda stepped down as the company’s Chairperson (Non-Executive Non-Independent) on July 28. The company’s board of directors accepted the appointment of Ameet Hariani, a Non-Executive Independent Director, as the new Chairperson. Mahindra Lifespace Developers Ltd’s Managing Director and CEO is Arvind Subramanian.

Mahindra Lifespace Developer, situated in Mumbai, is one of the country’s largest real estate developers. Mahindra Lifespace Developers Ltd, founded in 1994, has a development footprint of 32.14 million sq ft comprising finished, ongoing, and upcoming residential projects in seven Indian cities.
It also has about 5,000 acres of ongoing and upcoming projects under development/management within its four integrated development/industrial clusters.

Mahindra Lifespace Developers Ltd announced an investment of Rs 500 crore in April to create India’s first net-zero energy housing project in Bengaluru, consisting of around 550 units. The company also said that starting in 2030, it will only create net-zero housing developments, and that it will become carbon neutral by 2040, ten years ahead of the Paris Agreement commitments.