Apple has attained a record growth in the third fiscal quarter with a commendable increase in sales and revenue. The year 2021 has been one of stellar market performance for the company and from the recent records, it is evident that the growth rate is accelerating. In countries like India, Latin America, and Vietnam the double-digit revenue growth is of notable capacity. With this, the tech giant has hit a record revenue of $81.4 billion. 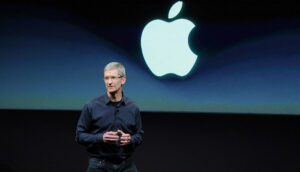 In particular, iPhone sales have seen a growth of 52%. According to Tim Cook, the widespread popularity of 5G in the iPhone 12 range is stated as the reason behind this brilliant performance. Another point of intrigue that implies a positive impact for the company is the large number of users who are switching from android to iPhone. Although the growth is pinned down to the popularity of 5G, Tim Cook also acknowledges the fact that overall, the reach of 5G is comparatively less and the company will align its focus to maximize it. They also expect to see further growth in the foreseeable future owing to the novelty of 5G. Its notable performance during the beginning and reception by users around the world paints a promising picture. This adds a streak of optimism in the context of the business domain being weakened by the pandemic. The hope is still alive for a promising future complete with progress and innovation with this growth record. However, the company is also keeping an eye out for uncertainties in recovery since the pandemic is still looming large in the background. After all, prudence is an important factor for any business, big or small.

Owing to the brilliant growth record, Tim Cook has been trending on Twitter. After all, Twitterati never shies away from acknowledging and appreciating the good (and criticizing the bad). Although we don’t know what is in store for the future, the present achievement is worth the applause. Here are a few reactions and responses from Twitter.

Apple broke all of the company's third fiscal quarter records with $81.4 billion in revenue. Here are the highlights of the report, and the conference call with Tim Cook and Luca Maestri $aapl https://t.co/gn6iyQgRRV pic.twitter.com/ilopqiBX3j

.@tim_cook spoke w/ me yesterday about this same issue at @Apple:

“…our main focus right now is on when to come back…we pushed it from early September to at least October…we are monitoring things daily to really conclude whether that is the right answer or not” https://t.co/zhBqwocynm

Tim Cook (for the third time): We are really, really early on 5G.