The M1 Pro and M1 Max, beefed-up versions of the M1 CPU that debuted last fall and the heart of Apple’s new MacBook Pro models, have been officially revealed by Apple.

Apple’s first in-house, Arm-based CPU for laptops, the M1, was announced a little more than a year ago. It debuted in Apple’s redesigned MacBook Air, 13-inch MacBook Pro, and entry-level Mac Mini, as well as the iMac and iPad Pro upgrades for 2021.

But, as good as the M1 chip was, it was only a solution for replacing Intel on Apple’s entry-to-mid-level hardware; Apple’s high-end MacBook Pro, iMac, and Mac Mini models (meant for developers, programmers, graphic designers, and other more demanding workloads) have all notably continued to use Intel’s chips for the past year.

The M1 Pro and M1 Max are Apple’s long-awaited solutions to that problem: while they’re both made on the same 5nm process, Apple promises significant performance improvements. Apple claims that the M1 Pro will have 70 percent greater CPU performance and twice the graphics performance of the M1. While the basic architecture of the M1 Pro remains the same, Apple has significantly improved the hardware with a 10-core CPU with eight performance cores and two efficiency cores, as well as a 16-core GPU with 2,048 execution units.

With 200GB/s memory bandwidth, the new chip allows additional RAM, with configuration possibilities up to 32GB (however, like the M1, memory is still built directly into the chip itself, rather than being user-upgradable). The M1 Pro features 33.7 billion transistors in total, which is almost twice as many as the M1.

But Apple doesn’t stop there: the M1 Max, which has the same 10-core CPU arrangement as the M1, but with eight performance cores and two efficiency cores, is even more powerful. The M1 Max, on the other hand, triple the memory bandwidth (to 400GB/s), RAM (up to 64GB), and GPU (with 32 cores, 4,096 execution units and four times the GPU performance of the original M1). 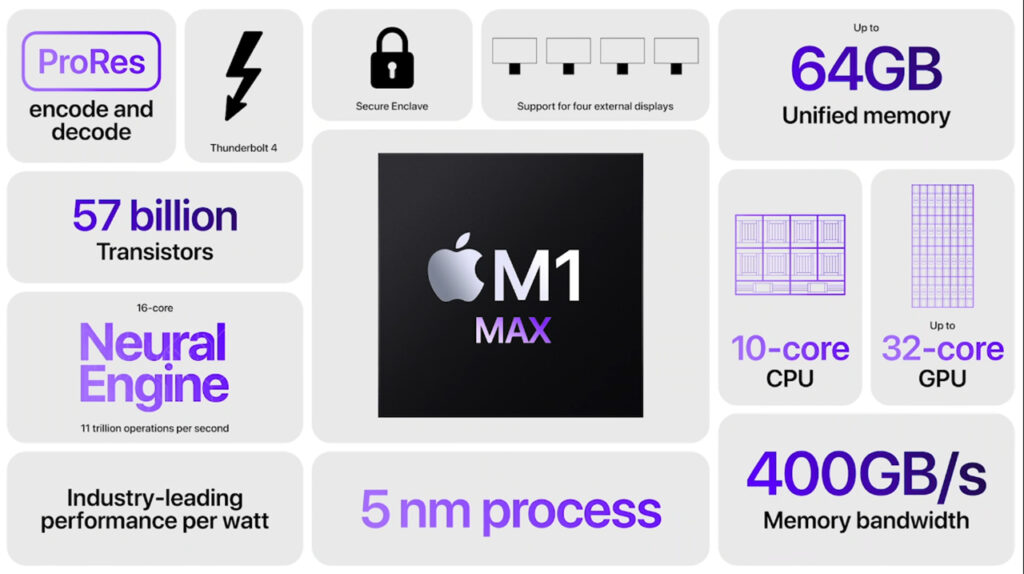 The M1 Max boasts 57 billion transistors, making it Apple’s most powerful chip to date. You may even connect up to four external monitors to a single device thanks to the new chip.

The original M1 had an eight-core CPU configuration, with four performance cores for more demanding tasks and four high-efficiency cores for longer battery life. Depending on the computer model, the M1 also had a seven-core or eight-core GPU and just 8GB or 16GB of RAM.

Apple also claimed that the new M1 Pro and M1 Max chips offer up to 1.7 times better CPU performance per watt than the regular M1 and unspecified four-core and eight-core PC laptop chips — though the company didn’t provide hard numbers or specify which other chips it was comparing things to, making it difficult to know how the new chips will perform in practice.