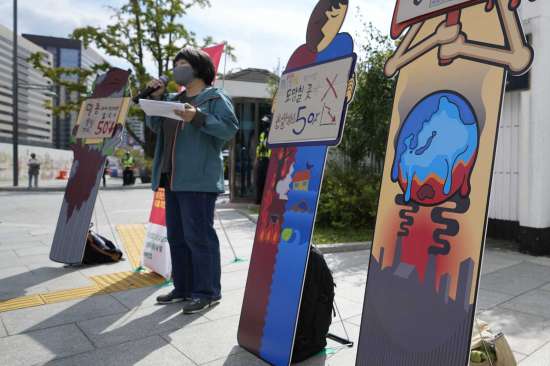 South Korea announced a new goal for combating climate change over the next decade on Monday, stating that it will strive to reduce greenhouse gas emissions by 40% below 2018 levels by 2030.

The country has been chastised for its initial plan, which called for a 26.3 percent cut. South Korean President Moon Jae-in said the new target is the “most enthusiastic” goal the country could set under current conditions as he promised stronger contributions to combat global warming ahead of a United Nations climate summit in Scotland next month.

By 2050, South Korea wants to be carbon neutral.

“Compared to advanced economies, which had already reached peak emissions in the 1990s or 2000s and were give a longer period of time to reduce their emissions, we have to reduce our greenhouse gas emissions at a much faster pace as we reached peak emission only in 2018, so the new goal is a very challenging target,” Moon said in a meeting of a presidential committee on climate goals.

The committee’s plan, which will be formalized at a Cabinet meeting next week and presented at the United Nations’ COP26 summit in Glasgow, aims to reduce emissions from electricity generation and heating by 44.4 percent below 2018 levels in 2030 by reducing the country’s reliance on coal-fired plants and expanding renewable energy sources.

The country also wants to cut down on fossil fuel use in industry and hasten the transition to electric and hydrogen-powered automobiles.

While participating in a virtual climate meeting convened by US President Joe Biden in April, Moon committed to set a more aggressive objective for cutting carbon emissions.

Moon went on to say that South Korea would no longer fund the construction of coal power plants in other countries, albeit this did not affect the country’s participation in ongoing projects to build two new coal plants in Indonesia and another in Vietnam.

According to the statement, South Korea plans to have 4.5 million electric and hydrogen-powered vehicles on the road by 2025, as well as more charging stations and infrastructure.

Environmentalists criticized the targets as being too low. Greenpeace climate and energy campaigner Justin Jeong told Reuters that the objective should be increased to greater over 50% to achieve international targets.

The goal of COP26, which starts on October 31, is to get more ambitious action from the almost 200 countries that signed the 2015 Paris Agreement to keep global warming well below 2 degrees Celsius – preferably 1.5 degrees Celsius – over pre-industrial levels.