The Sandbox and its native token SAND have seen consistent inflows of new assets, with the SAND token reaching an all-time high of $3.61 on November 17th. Since breaking out, the SAND token has succumbed to selling pressure and has dropped below the $3.30 support level. 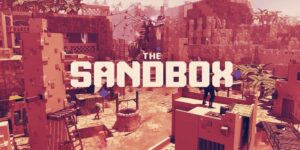 While there may be more selling pressure in the short term, the increased interest in the metaverse and virtual properties has pushed the price of virtual land up.“This should help catapult their growth plans in the metaverse and NFT space, which is a focus of forward-thinking crypto investors at the moment,” Vince said of The Sandbox.

The Sandbox has seen a 257 percent rise in trade volume in the last week due to increased demand for its NFTs. As the additional property is purchased by enthusiastic users, the value of land within the virtual gaming universe has likewise reached new all-time highs. As demand for the Metaverse grows, SAND tokens hit fresh highs

The Sandbox is unlike any other game experience now available, in that players have the flexibility to create endless content, sell it, and establish an entire networked economy around it. User-generated content can include everything from characters, buildings, and goods too complicated games that can be deployed on a user’s private territory for other gamers to enjoy.

The Sandbox is still in development and not fully functional at the time of publication, but at the end of November, the Sandbox team will launch their first play-to-earn event, featuring 18 different game experiences that will all allow users to earn SAND and NFTs in exchange for their participation.

The Sandbox should be on everyone’s radar, with several partnerships already announced, including The Walking Dead and Snoop Dogg. Snoop Dogg has announced a new relationship with The Sandbox, the metaverse project where he recently revealed himself as the non-fungible token (NFT) whale CozmoMedici. Simply defined, the platform is a decentralized game universe. People who sign up can construct, share, and sell NFTs, similar to a Minecraft-style environment for NFTs.

Sandbox is a blockchain-based virtual world that allows users to create, build, buy, and sell digital assets in the form of a game, and the creators of the SAND token is releasing part of its metaverse to players for the first time after four years of development, via The Sandbox Alpha, a multi-week, play-to-earn (P2E) Alpha event.

The Sandbox Alpha will begin on November 29th, 2021, and will go until December 20th. For the first time, players will be able to explore the Sandbox Metaverse, ‘via 18 experiences produced by the Sandbox’s teams.’

Also read: India plans to reduce GST on Cryptocurrency from 18% to 1%