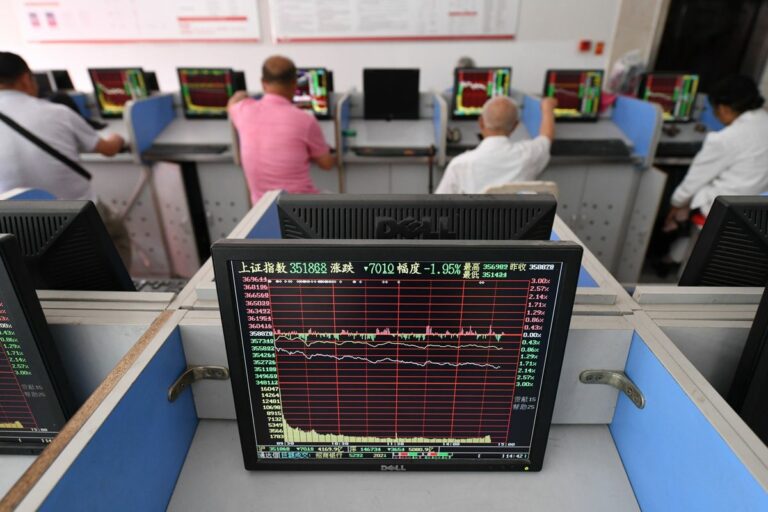 As the crackdown angst grows, Americans are turning against Chinese stocks

According to Bloomberg, Chinese stocks are fast becoming the asset to avoid for American investors. China exposure has been reduced by influential investors such as George Soros, and Cathie Wood’s ARKK ETF no longer holds any Chinese shares.

According to their 13F reports, many others suffered losses. One of the most popular bets among managers polled by Bank of America Corp. was betting against the country’s stocks. Marshall Wace, one of the world’s largest hedge funds, has stated that Chinese ADRs are no longer investable.

This is a stark contrast to earlier in the year, when foreign investors poured more money into China’s domestic equities than at any other time in history, propelling the MSCI China Index to a 27-year high. Now, as China’s government pursues industries that threaten its goal of “shared prosperity,” global fund managers are dealing with trillion-dollar losses. Even though the MSCI China Index is trading at its lowest level since 2005 when compared to the S&P 500, selling has continued this week.

Regulatory pressure is increasing in both China and the United States. On Monday, Securities and Exchange Commission Chair Gary Gensler cautioned about the dangers of investing in Chinese companies and instructed SEC staff to “pause for the time being” in approving IPOs of shell companies that Chinese corporations use to list. On Tuesday, the Nasdaq Golden Dragon China Index, which monitors 98 of China’s largest companies that are publicly traded in the United States, plummeted for the sixth day in a row after Beijing released new guidelines aimed at avoiding unfair online competition. 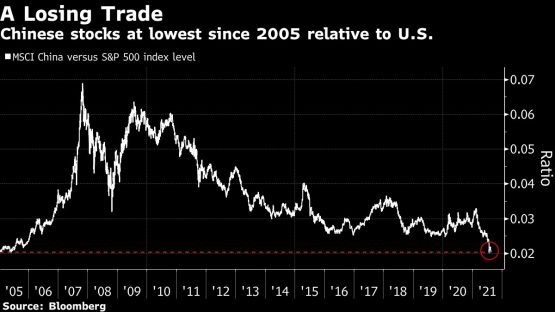 China’s crackdown on its technology and education industries, according to Paul Marshall, co-founder of Marshall Wace, a $59 billion investment group, has repulsed investors, even if officials have attempted to mitigate the damage. The billionaire projected in a letter to clients last week that the country’s listings will be mostly confined to the mainland.

The MSCI China Index has plummeted about 30% since its February peak, dragged down by steep drops in the education sector for companies like Tal Education Group and Gaotu Techedu. Tencent Holdings, China’s largest publicly traded company, is near a one-year low. The S&P 500, on the other hand, is risen 13% over the same time period, while the MSCI All-Country World Index is up 6.9%. While Wall Street strategists continue to downgrade their China recommendations, analysts haven’t been this bullish on the S&P 500 in two decades.

It’s becoming more trendy to bet against Chinese stocks. According to a recent study of fund managers conducted by Bank of America, “Short China Stock” is the most popular trade among investors, after only “Long US Tech Stocks” and “Long ESG.” It received a higher number of votes than “Long US Treasuries.” “China policy,” according to almost 16% of those polled, is now the biggest danger, up from nearly zero in July. Inflation, a taper tantrum, Covid-19, and an asset bubble were all in the top five.

Because of the sell-off in Chinese stocks, the country’s enterprises are dropping out of the list of the world’s largest by market capitalization. Tencent is the only Chinese company left in the top ten publicly traded firms, and it is on the verge of being surpassed by Visa Inc.

Some investors see potential. According to Hugh Young, chairman of Aberdeen Standard Investments’ Asian arm, the firm acquired Tencent on the fall and maintained most of its other big-tech assets in China mostly unaltered during the current selloff.

According to Young, “I don’t believe anything strategic has changed” in China, and restrictions will help the responsible players.

As losses increase, staying the course is increasingly difficult. While a Hong Kong index of largely Chinese tech stocks recovered 0.9 percent on Wednesday morning, it followed a five-day, 9 percent drop. This year, the index has lost 25% of its value.