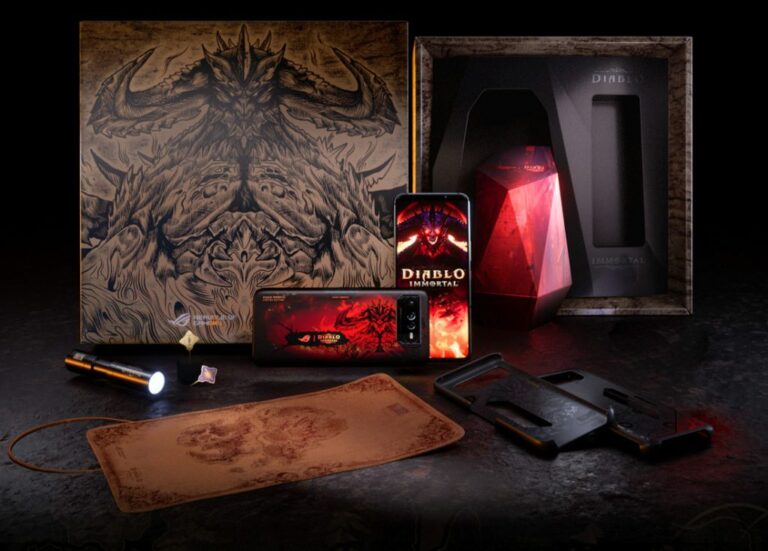 With this being said, recently we got to see Asus joining in hand with the Diabo Immortal peeps, and with this partnership, the smartphone maker has now made a completely new limited edition gaming phone, especially for the DIablo Immortal fans.

This smartphone, the Asus ROG Phone 6 comes with the flavor of providing a flagship-premium gaming experience coupled with a theme based on the Diablo Immortal game. Here is everything we know so far about this game:

This Asus smartphone will be a limited edition with a Diablo Themed back design over the regular Asus ROG Phone 6 smartphone.

Asus has also improved its appearance significantly1. It incorporates the Diablo Immortal logo’s glumming RGB lights. The rest of the design facts are nearly identical to the normal Asus ROG Phone 6 smartphone.

The peculiarity of this smartphone is not limited to the design on the rear, but Asus appears to have made several changes to the software as well.

Concerning the software tweaks, it has been stated that with the connection with the Diablo game, Asus has introduced new Diablo themed animations, as well as various specialised wallpapers and distinctive appearing charging animations with sound effects and a custom created Always-On display.In terms of accessories, Asus has introduced a slew of new game-themed items, like the Shield Blessing Aero Case, a Sanctuary map, Fahir’s Light, and the Immortality Ejector Pin, which includes a Diablo emblem.

This also boasts a larger screen that measures a massive 6.78-inches in size. This monitor will also have a large AMOLED panel with capability for a quicker refresh rate of up to 165Hz.

This smartphone is powered by the newest Qualcomm flagship, the new Snapdragon 8+ Gen 1, and will be paired with the latest and fastest 16GB of RAM and up to 512GB of internal storage.

On the photography front, this smartphone features a trio of rear-facing cameras, including a primary 50MP camera sensor, a 13MP Ultra wide angle sensor, and a 5MP Macro camera. On the front, we will see a 12MP selfie shooter.